The Young and the Restless Spoilers Next 2 Weeks: Newmans’ Mystery Attacker – Victoria and Phyllis Fight For Billy

BY Heather Hughes on December 2, 2018 | Comments: one comment
Related : Soap Opera, Spoiler, Television, The Young and the Restless 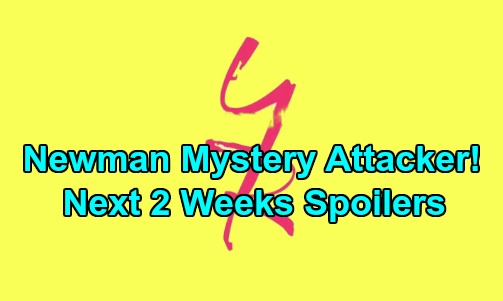 The Young and the Restless (Y&R) spoilers for the next two weeks tease that we’ll see growing fears as well as growing feelings. The week of December 3-7 will bring a series of disasters for the Newman clan. The stables will burn down and Nikki will receive a frightening reminder of J.T. (Thad Luckinbill) in her bed. His filthy clothes will appear, so Nikki will wonder what they’re really up against here.

Later, Nikki will feel the pull of a familiar vice. It sounds like she’ll be tempted to start drinking again, so she’ll definitely need some support. Let’s hope Nick (Joshua Morrow) and Victoria (Amelia Heinle) can keep Nikki from hitting the bottle.

Unfortunately, the hits will keep coming as Victor (Eric Braeden) goes missing. Nikki will even be assaulted before the week’s through, so some rough moments are ahead. Over with Sharon (Sharon Case), she’ll find herself drawn to Rey (Jordi Vilasuso). He’ll feel the same way, but Mia (Noemi Gonalez) won’t go down without a fight.

Victoria (Amelia Heinle) will also give Billy (Jason Thompson) some tough love. He’ll want to reunite with Phyllis (Gina Tognoni), but Victoria may not think that’s such a good idea. She might view “Philly” as a toxic relationship. Of course, a little piece of Victoria might be hoping for a reunion with Billy herself!

Phyllis will indeed let herself get closer to Billy, but the jury’s still out on whether they’ll truly try again. There’s a lot of pain between them, especially on Phyllis’ end. They were on a break when Phyllis slept with Nick, but Billy still felt the need to seek revenge by sleeping with Summer (Hunter King). That could be a low blow to get past, so we’ll see if Phyllis is willing to try.

Meanwhile, Fen (Zach Tinker) will return home with the news that he’s leaving law school to pursue a music career. Michael (Christian LeBlanc) and Lauren (Tracey E. Bregman) will certainly be thrown for a loop! During the week of December 10-14, Reed (Tristan Lake Leabu) will make a Y&R comeback, too. He’ll undoubtedly want some answers about the J.T. murder investigation.

Back with Nikki, The Young and the Restless spoilers say she’ll take a huge risk. It could be something that’ll help the cover-up crew if it pays off, but it could also turn into a nightmare. As for Sharon, she’ll be cornered by her daughter. It seems Mariah (Camryn Grimes) won’t be happy about Sharon’s behavior. Will this have something to do with Rey (Jordi Vilasuso)?

Mariah may feel like Sharon’s giving herself false hope and setting herself up for heartache. She’s always trying to look out for her mom, but Sharon doesn’t make it easy. Finally, Victoria will need someone to lean on. Billy will realize that, so he’ll gladly step up for his ex. Will their friendship grow into something more or will Billy stick with his goal of winning back Phyllis?