BY Olivia Marie on December 1, 2018 | Comments: one comment
Related : Soap Opera, Spoiler, Television, The Young and the Restless 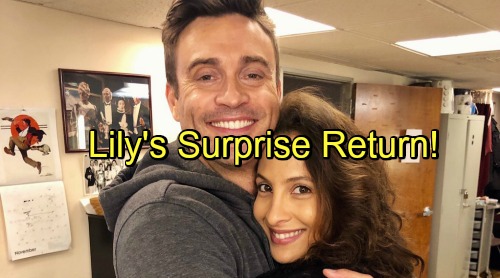 The Young and the Restless (Y&R) spoilers tease that Lily Winters (Christel Khalil) will be returning to the CBS soap opera for some heavy drama. It hasn’t yet been released how long Lily’s arc will be or the exact dates of her coming run on Y&R but fans know it will hot drama. Lily’s first appearance will likely air sometime from end the December to the beginning of January 2019.

Of course, the Y&R fans know that Lily is in prison for Hilary’s (Mishael Morgan) death. She is serving a fairly long sentence, with her family frequently going to see her in prison. Cane (Daniel Goddard) frequently goes to see her with the kids. The writers show him leaving to see her but have not shown Lily since she was transferred to another prison for her safety.

Back in August 2018 Khalil announced that she wanted to be dropped to recurring status. She claimed she wanted to pursue other acting jobs outside of daytime. Since then, she appeared in a Lifetime TV movie.

Back Filming at Y&R

Daniel Goddard posted a picture to Twitter with Christel Khalil, stating that she is back. Khalil was at CBS studios taping new Y&R Lily scenes. In the tweeted pic she does not appear to be wearing her prison uniform, but it’s likely Cane will visit her behind bars – perhaps for Christmas or New Year’s?

If the fans are looking for Lily to return to Y&R full time, they will probably be disappointed. There is no buzz yet on any long-term return so based on past history, we can expect Lily’s should be for a few days, at best. The Young and the Restless is currently focusing on Devon Hamilton’s (Bryton James) struggle with grief.

To a significant extent Devon’s current mental breakdown relates to Lily’s fate –  something for which he is largely responsible. Y&R buzz says that Lily’s return will tie in with Devon’s storyline. Soap fans, are you surprised that Lily is returning? Are you looking forward to seeing the prisoner for the holidays. Don’t forget to come back to CDL for more Young and the Restless (Y&R) spoilers, news, and casting updates!

Reunited and it feels so good! #HappyBirthday to this girl right here! I’ve missed you & ❤️ you! It’s so great to have you back! #Lane #yr pic.twitter.com/oHgAezq0qC