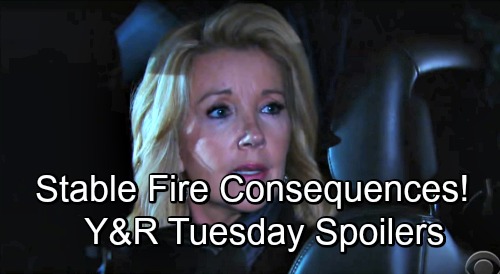 The Young and the Restless (Y&R) spoilers for Tuesday, December 4, tease that Victoria (Amelia Heinle) and Nikki (Melody Thomas Scott) will race back to the ranch. After receiving word about a fire on Monday’s Y&R episode, December 3, they’ll rush right over to see the extent of the damage. Firefighters will battle the blaze before it gets out of hand.

On Tuesday, Nikki will learn they were able to contain the fire to the stables. Thankfully, the staff got the horses out in time as well. Rey (Jordi Vilasuso) will take a look around the premises and do some detective work. As he takes a look at all the evidence, he’ll undoubtedly determine that this had to be arson.

Of course, Nikki will worry about why the Newman family’s being targeted. Victor (Eric Braeden) has plenty of enemies, so she’ll know this could have something to do with him. However, her biggest fear will be that this is connected to the J.T. (Thad Luckinbill) secret. Nikki will know that this shocking act is a message, so she’ll assume the sender is someone quite vicious and powerful.

Rey will force Victoria and Nikki to leave the ranch for the night. Since there indeed appears to be a threat, Rey just won’t think it’s safe for them to be around. He’ll also want a chance to snoop without interference. Rey suspects that Nikki and Victoria are hiding something, so he’ll hope to figure out what it is soon enough.

In the meantime, Mariah (Camryn Grimes) and Tessa (Cait Fairbanks) will spend another awkward evening together. All trust has been destroyed between them, so things will naturally be tense in that tiny studio apartment. Mariah recently opened up to Sharon (Sharon Case) about her dilemma. She’s struggling to get past Tessa’s lies and actions, but her love prevents her from walking away.

As a result, Mariah will want to give this relationship another shot. She feels betrayed since Tessa blackmailed her mother and secretly kept the cash along with a backup thumb drive. We can’t forget about Mariah’s betrayal though. She played games with Tessa’s heart by faking their reunion. Mariah also lied about never exposing Tessa as the blackmailer, so Tessa had a good reason to protect herself.

Mariah will hope they can somehow move on, but it’s going to be difficult. Tuesday’s Y&R episode will bring some reconnection troubles. Tessa and Mariah certainly won’t be able to conquer their issues overnight, so they’ll just have to tough it out for a while. They should find their way back to each other eventually.

Other Young and the Restless spoilers say Devon (Bryton James) will be ready to talk. He’s been shutting down his loved ones lately, but he’ll finally have a change of heart. Devon will need a shoulder to cry on, so Nate (Brooks Darnell) will gladly step up. He’ll help Devon take a step or two toward healing, which is fantastic news.