The Young and the Restless Spoilers: Billy’s Lust For Summer To Blame For Philly Split 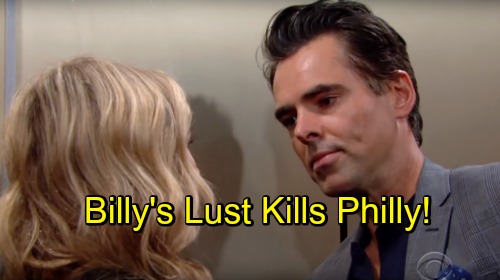 The Young and the Restless spoilers tease that the last days of Philly are playing out. The end of Phyllis (Gina Tognoni) and Billy (Jason Thompson) now feels likely by the end of summer.

Summer (Hunter King), meaning the person, not the season, is complicating matters, just as she has this sentence with its multiple commas. She wants Billy and now, as told to Kyle (Michael Mealor), intends to have a relationship with him.

Billy has committed many impulsive acts through the years and through multiple actors in this role. Most of the time those knee-jerk decisions involved gambling. Sure enough, as Summer intended, Billy’s Achilles heel was struck and he embraced the poker table earlier this, uh, time between spring and autumn.

That misguided choice happened because Billy didn’t ask Phyllis for help when he felt the card’s pull. Many people, though far from all, seek their loved-one’s aide when addiction is screaming. Compulsions require sustained, positive responses, including treatment after the free will choice to do so has been made.

Summer is playing dirty. She honestly doesn’t believe that her mom and Billy are a good pair. But rather than waiting to see if they don’t last, she ginned their love game.

The original edition of grown-up Summer would never behave in this way. But King’s character recently told her mother that she was tired of being used. Summer’s stated reaction was to strike first, do as she pleases, and not care about collateral damage other people would suffer. Yes, that evokes memories of Michelle Stafford’s classic Phyllis because that’s who King’s Summer is now.

Here’s the thing, many males find Summer to be physically attractive. Those who are unattached could make a fair play for her hand. Being committed to Phyllis, Billy had no intentions toward her daughter until she began throwing herself at him after returning to Genoa City. But Billy still wasn’t considering Summer as a lustful option until Philly began having trouble.

As noted, Summer purposely created trouble between her mom and Billy. The intent was to split them and take Billy.

Phyllis never suspected this selfish plot until Summer revealed what she knew about Phick’s one-off. That resulted in increasing tension, including Billy’s admission that he would theoretically be interested in Summer in an alternate reality. Let’s face it, it takes two to tango and if Billy were honest with Phyllis and didn’t lust after Summer then Philly would be safe.

Now, due to all that’s happened, Summer’s hoped-for goal has become realistic. Philly will soon fall. What also seemed impossible, the rise of Silly, is also becoming at least likely. CDL is a leading source for everything linked to The Young and the Restless. Check back regularly for Y&R spoilers and news!