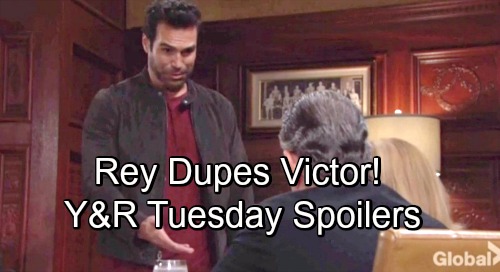 The Young and the Restless (Y&R) spoilers for Tuesday, August 21, tease that Summer (Hunter King) will feel like she’s on the edge of something big. On Monday, Summer has a bit of a breakthrough with Billy (Jason Thompson). She gets him to admit that in a world where Phyllis (Gina Tognoni) wasn’t in the picture, he might be attracted to Summer.

That’ll motivate Summer to keep up her efforts in Tuesday’s new Y&R episode, August 21. The Young and the Restless spoilers state that Summer will flaunt her body. A weekly preview shows Summer standing beside Billy in her bra, so this may be when she makes that move. Summer wants to win her bet with Kyle (Michael Mealor), but there’s more to the story. She also wants to make Phyllis suffer and conquer her crush.

Summer will do her best to knock all three things off the list this week, but it’ll take some hard work. Nevertheless, more progress will happen soon enough. Y&R fans can expect Billy to battle serious temptation. The Young and the Restless spoilers say we’ll see some sizzle between them, but Billy may control himself at the last second. He loves Phyllis, so he won’t want to destroy their bond.

Of course, Summer will stay focused on her goal. She’ll feel Billy caving in little by little, so she’ll come up with a way to up the ante. Billy’s upcoming business trip will give Summer a dangerous opportunity, but Kyle just might spoil everything. Some shockers are coming up later this week, so you can expect Phyllis to be out for blood!

Other Young and the Restless spoilers say Rey (Jordi Vilasuso) will introduce himself to Nikki (Melody Thomas Scott) and Victor (Eric Braeden). He’ll pretend to be impressed by Genoa City’s most famous power couple. Rey may be able to butter the Newmans up, but he’ll secretly be working on his investigation. He’ll do whatever he can to uncover stunning J.T. (Thad Luckinbill) bombshells.

Meanwhile, Nate (Brooks Darnell) will reach out to Victoria (Amelia Heinle). He’ll probably want to apologize for overstepping during their last chat. Victoria felt like Nate was far too nosy, but she definitely overreacted. She’s just terrified that Nate will learn the truth about the night of J.T.’s death.

Victoria might offer an apology as well, but she’ll still keep her guard up. Nate could serve as another threat, so Victoria will have to watch out for herself and the rest of the cover-up crew. We’ll give you updates as other Y&R news comes in. Stick with the CBS soap and don’t forget to check CDL often for the latest Young and the Restless spoilers, updates, and news.