The Young and the Restless Spoilers: Billy’s Risky Deal Sparks War with Lauren – Nick and Ashley Benefit from Epic Blunder

BY Heather Hughes on August 6, 2018 | Comments: one comment
Related : Soap Opera, Spoiler, Television, The Young and the Restless 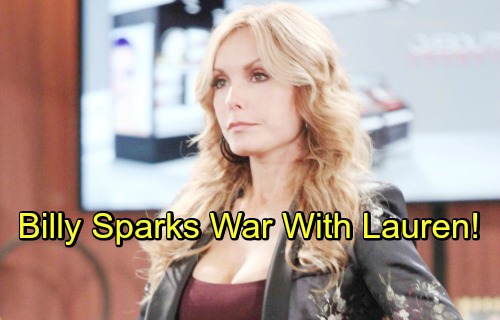 The Young and the Restless (Y&R) spoilers tease that Billy’s (Jason Thompson) secret deal will spark a war. In Thursday’s episode, Billy meets with some important executives and refuses to share the details with Phyllis (Gina Tognoni). He promises this is going to be huge and urges her to just trust him on this.

Once Billy’s plans are revealed, they certainly won’t go over well. It turns out Billy wants to branch out and open plenty of Jabot cosmetic boutiques. After Billy nails down the details and gets the execs on board, he’ll be ready to share the big news. The Young and the Restless spoilers say Billy will be excited about this major announcement. He’ll believe it’s going to be a gamechanger for the company.

Billy will spill all to Phyllis and everyone else with Jabot ties. Unfortunately, the Fenmore’s gang won’t be too happy about this. Lauren (Tracey E. Bregman) may think this is going to cut into her business. She may argue that Fenmore’s will take a hit thanks to Billy’s unilateral move.

Lauren will at least think she should’ve been consulted first. Perhaps the boutiques will eliminate the option for Fenmore’s exclusives or simply overshadow their brand. Lauren may feel like Billy’s trying to muscle Fenmore’s out of the picture, so she’ll really let him have it.

The Young and the Restless spoilers say Billy will defend his decision and spar with Lauren. As Jabot’s CEO, this was his call to make. Billy won’t see any problem with his latest deal, which should make Lauren even angrier. Phyllis recently told Nick (Joshua Morrow) that Lauren might be up for moving to Dark Horse. This could be what puts that agreement in motion.

Billy’s taking a few too many risks these days. Y&R fans have Summer (Hunter King) to thank for that! She got him back into gambling, so it seems Billy’s doing it at work now. This isn’t a poker table wager, but it’s just as dangerous. Billy’s setting himself up for a serious fall, so he’d better watch out for power-hungry Ashley (Eileen Davidson). She’ll be circling like a vulture soon enough.