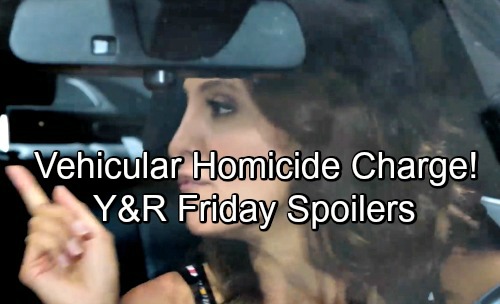 The Young and the Restless (Y&R) spoilers for Friday, August 3, tease that Devon (Bryton James) will deliver a harsh ultimatum. The news of Lily’s (Christel Khalil) role in the crash has left him furious. Devon now blames Lily for killing Hilary (Mishael Morgan) and her unborn child. As Devon continues to mull all this over, he’ll decide that Lily has to pay the price.

Devon may or may not issue this ultimatum to Lily herself. He can barely stand to look at her right now, so he might give Cane (Daniel Goddard) his demands. Regardless, this will probably involve Devon’s pursuit of justice. Perhaps he’ll suggest that Cane should convince Lily to turn herself in. If she doesn’t confess to the authorities, Devon will be willing to do it for her.

The Young and the Restless spoilers say Devon won’t be messing around. He’ll want Lily charged with vehicular homicide, so his pain clearly runs deep. However, it won’t take any convincing to make Lily do the right thing. By next week, Lily will take the initiative and make a full confession to the cops. She’ll admit that she drove recklessly, blew through a red light and took two innocent lives.

Elsewhere, Victor (Eric Braeden) will be up to something. He appears he’ll start scheming as usual, so Paul (Doug Davidson) will grow suspicious. Y&R fans know Paul would love to bring Victor down. He may hope a new opportunity’s on the horizon, but he shouldn’t hold his breath. When it comes to Victor, he never really suffers for his crimes – at least not for long.

While Paul keeps tabs on his target, Nick (Joshua Morrow) could add to his own list of problems. The Young and the Restless spoilers say Nick will be tempted in Friday’s episode. Will he consider doing something that could provoke Victor? Dark Horse should provide him with new chances to wreak havoc.

Of course, the bigger concern is Nick’s relationship with Phyllis (Gina Tognoni). They hooked up, but was it truly just a one-time deal? These two have been hanging out more lately, which probably isn’t the best plan. Phyllis is still having issues with Billy, so she’s vulnerable right now. It’d be best if Phyllis could avoid Nick entirely, but life has a way of throwing them together.

Will we see another round of “Phick” sex or can they control themselves this time? The Young and the Restless spoilers say drama’s brewing no matter what, so stay tuned for the trouble ahead. We’ll give you updates as other Y&R details emerge. Stick with the CBS soap and don’t forget to check CDL often for the latest Young and the Restless spoilers, updates, and news.