BY Heather Hughes on August 1, 2018 | Comments: one comment
Related : Soap Opera, Spoiler, Television, The Young and the Restless 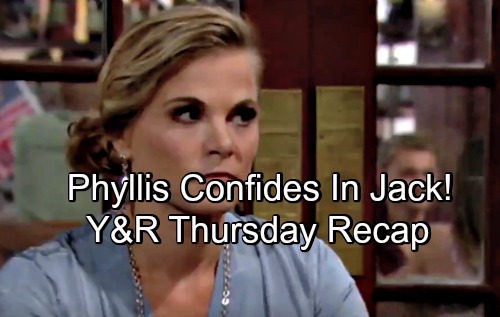 The Young and the Restless (Y&R) spoilers update and recap for Thursday, August 2, tease that Cane (Daniel Goddard) will try to shut Shauna (Camryn Hamm) down. He’ll suggest that she’s just drained and needs to rest. Cane will add that Shauna’s not remembering the accident correctly.

However, Shauna will stand by her claims and Charlie (Noah Alexander Gerry) will back her up. He’ll let Lily (Christel Khalil) know that she really did run the red light and cause the crash. Devon will blast Cane for convincing the teens to lie. He’ll be furious that they deceived him throughout Hilary’s (Mishael Morgan) ordeal.

Y&R spoilers say Cane will offer an explanation. He was worried that Devon wouldn’t forgive Lily for her mistake. Devon will fire back that Cane was absolutely right. After everyone else hustles out, Devon will lash out at Lily alone. When he’s done, he’ll snap that she should go home to her family. Devon will note that thanks to Lily, he doesn’t have one of his own.

Meanwhile, Neil (Kristoff St. John) will lecture Cane about his deception. He’ll feel like Cane’s natural instinct is to lie. The Young and the Restless spoilers say Cane will point out that Lily could face charges. He won’t think Lily should land behind bars for her tragic error.

At Crimson Lights, Nick (Joshua Morrow) will sit down for a chat with Summer (Hunter King). He won’t convince her to join him at Dark Horse, so they’ll change the topic to “Shick.” Summer will feel like Sharon (Sharon Case) and Nick seem solid. She’ll drop a hint about Phyllis (Gina Tognoni) and Billy’s (Jason Thompson) problems, so Nick should squirm a bit.

Later, Summer will join Victor (Eric Braeden), Victoria (Amelia Heinle) and Nikki (Melody Thomas Scott) at the athletic club. The Young and the Restless spoilers state that Victor will surprise them with a special dinner. They’ll share some sweet family moments and enjoy a fun toast.

Once their gathering wraps up, Victor want to take a walk with Nikki. He’ll suggest going to Chancellor Park, but Nikki won’t be on board. Thanks to all the J.T. (Thad Luckinbill) drama, that place undoubtedly give her the creeps now! Talk will turn to Nick, so Nikki will chime in with her thoughts. She’ll make it clear that she’s not giving up on Nick rejoining their family.

Over with Phyllis, she’ll unload her frustration on Jack (Peter Bergman). Phyllis will be upset about Lily and Cane’s actions, so Jack will gladly let her vent. When Phyllis expresses concern about Billy’s gambling and whereabouts, Jack will urge her to look for him at Jabot.

The Young and the Restless spoilers say Phyllis will catch up with Billy later. She’ll want to talk in his office, but Billy will nix the idea. Phyllis will naturally suspect there’s a poker game in progress, but Billy will prove this is strictly business. He’ll have some executives in there for a meeting, but he won’t reveal what he’s up to. Nevertheless, Billy will have a good feeling about his top-secret deal.

Finally, Nick (Joshua Morrow) will make another pitch to Victoria (Amelia Heinle). She’ll want to stick with Victor (Eric Braeden), but Nick won’t think their father can be trusted. However, he’ll assure Victoria that she can always come to Dark Horse. The door’s open to her anytime.

Is Nick right to be worried? Will Victoria eventually get burned again by Victor? We’ll give you updates as other Y&R news comes in. Stay tuned to the CBS soap and don’t forget to check CDL often for the latest Young and the Restless spoilers, updates, and news.