The Young and the Restless Spoilers: Brittany Blackmails Victor Over J.T. Murder – Give Up Christian or See Victoria and Nikki in Prison 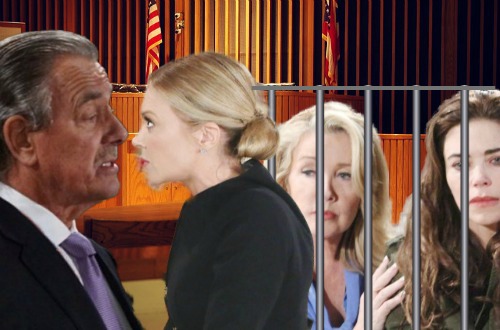 The Young and the Restless (Y&R) spoilers tease that Brittany (Lauren Woodland) will remain determined. Despite Wednesday’s devastating loss (June 13), Brittany will refuse to give up. She’ll urge Nick (Joshua Morrow) to keep hope alive and trust that they can figure something out.

Brittany will do whatever she can to reunite Nick (Joshua Morrow) and Christian (Jude and Ozzy McGuigen) in the coming weeks. She won’t want the temporary custody situation to become permanent. Nick’s really counting on Brittany to save the day, so she’ll work hard to make it happen.

After the rotten strategies Michael (Christian LeBlanc) used, Brittany should have no qualms about getting down in the mud as well. That’s just what you have to do when you go up against Victor (Eric Braeden). Will Brittany try to get the goods on Gramps? Will she search for dirt to shift the case back in Nick’s favor?

Brittany just might do some investigating soon. She could even turn to a P.I. and monitor Victor’s activities. Of course, Brittany would also want to know what Victor’s loved ones have been up to. This could lead to a shocking discovery and some potential blackmail material. Y&R fans can’t forget that the truth about J.T. (Thad Luckinbill) is still buried – literally!

The Young and the Restless spoilers say Brittany will confront Victoria on new Y&R episodes next week, June 18-22. She’ll insist that she’d like some answers about J.T. It’s possible Brittany will stumble across some incriminating evidence. There could be something that points in Victoria’s direction before long.

Victoria will face intense pressure, so the risk of cracking is high. She’s been on the verge of confessing before and it could easily happen again. That’s especially true if Brittany has proof or at least correctly guesses what played out. She could blow everything for the cover-up crew if she tips Paul (Doug Davidson) off. If he starts digging around the park, it’ll be over for the whole gang.

Could this be Brittany’s path to a victory? J.T. was an abusive monster toward the end, so Brittany might be willing to let this slide. After all, Nikki (Melody Thomas Scott) didn’t mean to kill J.T. She was just protecting Victoria when things went awry.

Brittany might agree to keep her mouth shut when it comes to the cops, but what about Victor? This could be Brittany’s ticket to major leverage, so she should really take advantage of it. What if she blabs to Victor and forces him to make a difficult choice?

Brittany may suggest that Victor needs to fix this custody drama and give Nick his son back. If he doesn’t, Vic’s wife and daughter could go to prison. In other words, Victor could either keep Christian or protect Nikki and Victoria. Brittany might contend that he can’t do both.

Nick may object if he hears about Brittany’s move, but she could convince him that Victor will back down. Brittany could argue that it’s simply a scare tactic. Would she be right about Victor caving in or would he call her bluff?