The Young and the Restless Spoilers: Cane Battles Temptation – Cheats on Lily While She’s Locked Up?

BY Marcy Cohen on October 31, 2018 | Comments: one comment
Related : Soap Opera, Spoiler, Television, The Young and the Restless 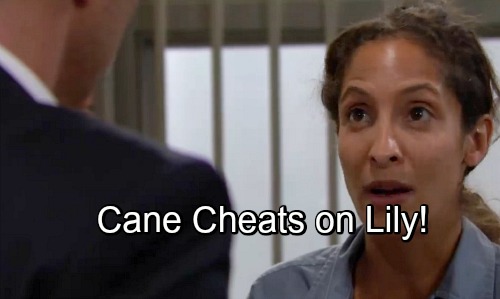 The Young and the Restless (Y&R) spoilers tease that Cane (Daniel Goddard) will deal with some family struggles. Lily’s (Christel Khalil) stuck behind bars, so Cane’s holding down the fort on his own. Unfortunately, that’ll become even more difficult soon. In addition to caring for little Sam, Cane will have to deal with his unruly teens.

Charlie (Noah Alexander Gerry) and Mattie (Lexie Stevenson) were understandably upset over Lily’s transfer. Things were already hard enough, but now she’s four hours further away. The physical distance will translate into emotional distance, so that’ll inevitably take a toll. Y&R fans can expect Mattie and Charlie to act out in some interesting ways.

The Young and the Restless spoilers say the twins will have incredibly different reactions. Charlie bailed on school for a while, but ultimately made a deal with Devon (Bryton James). He may not rebel quite as much now, so he might become clingy instead. Charlie could push for visits all the time and hop on Devon’s jet every chance he gets. He might become too wrapped up in his mom’s pain.

Mattie, on the other hand, has become a bit more rebellious lately. That trend could continue and potentially get in the way of her studies. Mattie needs to be thinking about college applications and preparing for her future. Instead, she may get distracted and feel like none of it even matters anymore. There’s bound to be a lot of pain for this family in the coming weeks.

That goes for Mom and Dad, too. Lily will obviously feel more isolated, so that could lead to trouble. As Cane drowns in household duties and sorrow, he’ll have a hard time coping as well. Their marriage will naturally take a hit. How could it not?

Devon tried every trick in the book to get Lily’s sentence reduced. If a billionaire can’t pull it off, there may be no hope. Lily might have to serve out the full year. Christel Khalil claims she wanted to drop down to recurring status, so Lily already hasn’t been around as much.

That might change down the road, but what happens in the meantime? Will they just keep Cane in limbo for the rest of Lily’s 12-month prison stint? Temptation might be just around the corner. Some other lovely lady might emerge as a shoulder to cry on. Cane will be vulnerable and emotional, which could be a bad combination.