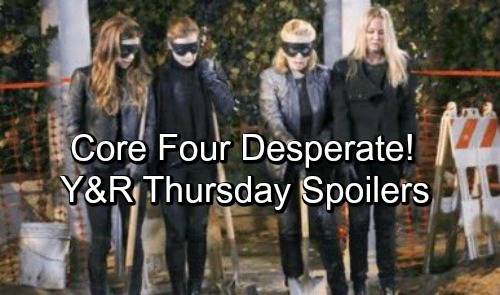 The Young and the Restless (Y&R) spoilers for Thursday, November 1, tease that Phyllis (Gina Tognoni) will feel good about her chances. On Wednesday, Phyllis pulls off a surprise strategy by hiring Kerry Johnson (Alice Hunter). The catch is Kerry will only accept the R&D job if Phyllis is CEO.

It seems Kerry really knows her stuff, so Jabot could certainly use her right now. Ashley (Eileen Davidson) left them with next to nothing. They’ll need new products and lines to keep customers interested, so Kerry may be able to help. She’s got the skills necessary if Jabot wants a shot at success.

As Phyllis dangles that shot in front of the board members, she’ll sense that victory is imminent. Thursday’s new Y&R episode, November 1, will bring plenty of confidence for Phyllis and none at all for Billy (Jason Thompson). He’ll feel frustrated thanks to his ex’s sneakiness, so he’ll undoubtedly cause some drama. Billy just won’t think this is fair, but it wasn’t fair when he used Summer (Hunter King) for revenge either!

Eventually, The Young and the Restless spoilers say a decision will be made. It looks like Phyllis will indeed come out on top, so she’ll have a lot of work to do. However, Phyllis can’t let this position distract her from cover-up chaos. Now that there’s a water leak in Chancellor Park, the core four really have to come together.

Phyllis will get flak for slacking off on their meetings, but she’ll manage to refocus. As for Nikki (Melody Thomas Scott), she’ll take charge of a tricky situation. It could involve some lingering Jill (Jess Walton) issues or perhaps another problem that suddenly pops up.

Regardless, Y&R spoilers say Nikki will handle it like a pro. She’ll make arrangements for the girls’ night gang to dig up J.T.’s (Thad Luckinbill) corpse and move it to another location. Once all the preparations have been made, the ladies can head out under cover of night.

Nikki, Victoria (Amelia Heinle) and Phyllis will start their mission by the end of the week. Sharon (Sharon Case) will show up to make waves before long. She won’t want the rest of them to blow this, so she’ll be there to monitor the exhumation project.