The Young and the Restless Spoilers: Cane Fights to Keep Lily Out of Prison – Devon’s Vengeance Out of Control

BY Marcy Cohen on August 2, 2018 | Comments: one comment
Related : Soap Opera, Spoiler, Television, The Young and the Restless 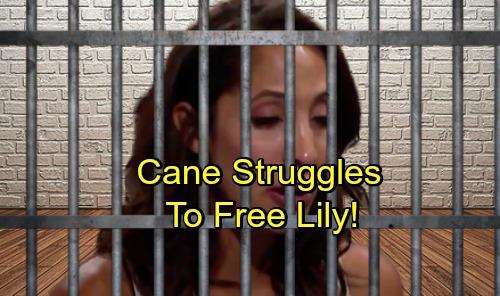 The Young and the Restless (Y&R) spoilers tease that Lily (Christel Khalil) will wrestle with more guilt. She already felt terrible about the accident, but she feels even worse now. Lily ran a red light and led to the crash that killed Hilary’s (Mishael Morgan) baby as well as Hilary herself.

Devon’s (Bryton James) dealing with the worst pain and rage he’s ever experienced. Lily’s longtime feud with Hilary isn’t helping here. Devon feels like Lily wanted this to happen, but that’s misguided. Lily definitely hated Hilary’s guts before all this went down, but she never wanted her enemy dead.

Nevertheless, Hilary’s gone and that’s something the whole family will have to cope with. The Young and the Restless spoilers say Devon will want Lily to suffer. She took his wife and child, so he’ll push for justice. Devon will have no problem taking Lily away from her own spouse and kids. In his vengeful state, Devon will think it’s only fair.

Despite Cane’s (Daniel Goddard) desperate pleas, Devon will want to hand Lily over to the cops. He’ll think about heading to the police station and spilling the real story. Meanwhile, Lily will realize she’s done irreparable damage. Two people are dead and that’ll be tough for her heart to take.

Of course, Lily is also facing the demise of a strong relationship. She might as well be dead to Devon. He’ll cut her out of his life, so Lily’s sure to feel hopeless. Y&R fans can expect Lily to make a shocking decision. She’ll catch her family off guard when she makes her next move.

It sounds like Lily will choose to turn herself in and take responsibility for her actions. She’ll realize she could be charged with vehicular homicide, but she’ll be too torn apart to care. That should leave Cane to clean up the mess. He’ll certainly want to keep Lily out of prison if he can.

You can bet Cane will hire a good lawyer for Lily. Michael (Christian LeBlanc) seems like the most likely candidate. Unfortunately, Lily may resolve to don an orange jumpsuit and accept her fate. She might believe she deserves it after everything that’s happened.

Cane, Charlie (Noah Alexander Gerry), Mattie (Lexie Stevenson) and Sam all need Lily in their lives. Lily will inevitably avoid a lengthy prison sentence in the end, but she can’t avoid Devon’s wrath. If he can’t make her pay with jail time, he’ll have to get creative.