BY Heather Hughes on December 21, 2018 | Comments: one comment
Related : Soap Opera, Spoiler, Television, The Young and the Restless 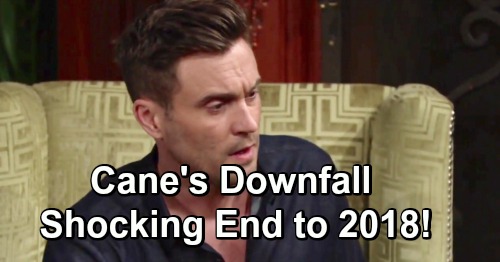 The Young and the Restless (Y&R) spoilers tease that the rest of Cane’s (Daniel Goddard) holiday season won’t go as planned. He’ll hope to have a nice visit with Lily (Christel Khalil), but he’ll face some major obstacles. Christmastime brings traffic, so that’ll be a big hurdle as Cane heads to Lily’s prison facility. He’ll get held up and miss most of their visiting hours.

In the end, Cane will only get about 30 minutes with his wife. Unfortunately, it probably won’t even be quality time. Lily isn’t doing well behind bars and Cane will sense that things are getting worse. He’ll feel like Lily’s slowly pulling away and shutting down.

Cane won’t know how to help or what to do, so he’ll start shutting down, too. This Y&R couple will definitely face some struggle as 2018 concludes.

Meanwhile, Devon (Bryton James) will start to move past some of his own struggles. He’s still dealing with plenty of Hilary (Mishael Morgan) grief, but he’s doing a better job of coping. Having Ana (Loren Lott) around has been good for him.

There won’t be druggie friends around to leave their stash in his sofa. Instead, Devon will surround himself with people who can give him love and bring him joy.

Ana, Cane, Abby (Melissa Ordway), Arturo (Jason Canela) and a few others will be in attendance. They’ll help Devon ring in the new year, but Cane’s worries will persist. He’ll just want to numb the pain and forget all the drama, so he’ll spend most of the night chugging booze.

Devon will reach out to Cane and hope he can offer some assistance, but Cane won’t really accept it. Things probably just have to get worse before they get better. The Young and the Restless spoilers say Cane will do something shocking as 2018 wraps up.

Since Lily’s so far away and Cane isn’t in a good place, cheating is certainly a concern. Cane’s been down that road before and he might do it again!