The Young and the Restless Spoilers: Cane’s Slow Motion Crash Continues – Danger Ahead In New Year

BY Sean O'Brien on December 31, 2018 | Comments: one comment
Related : Soap Opera, Spoiler, Television, The Young and the Restless 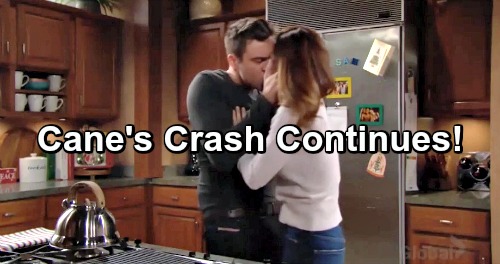 The Young and the Restless spoilers tease that Cane’s (Daniel Goddard) veer off the rails continues just prior to the new year. This ominous event, where he drinks himself into oblivion at Devon’s (Bryton James) will remind fans of the Juliet (Laur Allen) scenario. And everyone knows where that night of sake bombs led.

This time Mr. Ashby won’t be on a business trip, or give an amateurish bro hug. He also won’t make his way to an attractive co-worker’s hotel room, somehow thinking that he was with Lily (Christel Khalil). Also, another child won’t be conceived through Cane’s night of drinking this time around.

Instead, Devon and his brother-in-law will switch roles. Recently, Cane had to play bad cop. He found a bag filled with illegal substances on Devon’s couch, called out Mr. Hamilton for hanging around with the sketchy characters who left it in plan sight, and sent Shauna (Camryn Hamm) to safety in Colorado, where her parents and brother live.

Devon took Cane and Nate’s (Brooks Darnell) advice to heart and began to see a psychiatrist who appears to be helping him deal with the lingering effects of Hilary’s (Mishael Morgan) death, as well as the death of Hevon’s unborn child. All of the above makes Devon the right person to help Cane now.

Lily’s jail term seems likely to be served in full, which means she’ll remain incarcerated at Lakewood until next September. Mrs. Ashby is there because of the fast-motion car crash she was responsible for last summer, though Hilary was distracting her at the time, meaning that Mrs. Hamilton was just as morally liable for what happened as Devon’s sister was.

Y&R teased Cane as a pill-popper just prior to the Juliet storyline. He was recovering from an operation at the time, which was written into the script due to Goddard’s real life injury. Thankfully Cane didn’t develop a pain-killer addiction at that time.

There are at least eight months until Khalil could be seen on screen again full-time, assuming she bumps to regular status from her voluntary recurring when September’s scenes would be played. So the writers need to create engaging drama in Cane’s life until that plot point arrives.

Based on his behavior in recent months and in recent years, Cane could develop a taste for liquid lightning. That would establish a conflict where he abandons his parental responsibilities.

Hopefully this isn’t the crash course Cane takes. Devon may need to serve as Cane’s checkpoint, just as his brother-in-law recently did for him. CDL is a leading source for everything linked to The Young and the Restless. Check back regularly for Y&R spoilers and news!