BY Heather Hughes on June 2, 2018 | Comments: one comment
Related : Soap Opera, Spoiler, Television, The Young and the Restless 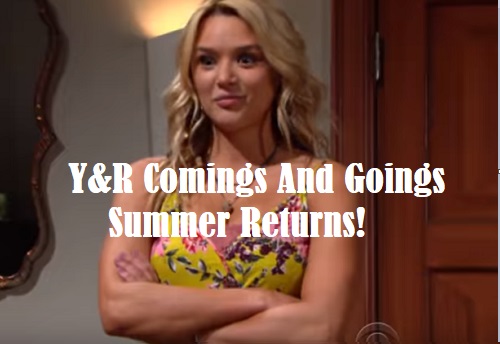 The Young and the Restless (Y&R) spoilers tease that we’ve got some comings and goings news to share. First, a familiar real estate agent will deal with drama. A bidding war will erupt over Chelsea’s (Melissa Claire Egan) old penthouse this week. Farrah Dubose (Erika Girardi) will be around to take all the offers and try to keep the peace. You can catch her on June 4 as well as June 6.

Hilary (Mishael Morgan) will initially be interested in securing Chelsea’s former home, but it won’t take long for Neil (Kristoff St. John) to sabotage her plans. He’ll make a bid of his own to keep Hilary away from Devon (Bryton James). The plot will backfire when Hilary runs to Devon with the news. He’ll ask Hilary to move in, so Neil isn’t going to be happy when he gets updates.

Jack (Peter Bergman) will hope to outbid both of them anyway. He’ll even flirt with Farrah a bit, so maybe he’ll think that’ll help him seal the deal. Later, Farrah will share scenes with Ashley (Eileen Davidson). The Young and the Restless spoilers say there could be some tension between these fierce characters. Ashley and Farrah both have strong personalities, so a little conflict is probably inevitable.

Summer (Hunter King) will also make her comeback this week. She’ll quickly catch up on everything she’s missed in Genoa City. Of course, Summer will be a troublemaker as usual. She’ll face a stunning arrest and start a few fights within her own family.

In other news, we have confirmation on Kelly Kruger’s (Mac) return airdate. You can see Mac back on Y&R starting June 22. Does that mean the J.T. (Thad Luckinbill) cover-up chaos will rev up by then? That seems like a good possibility. It’s time for some shocking secrets to come out, so Mac needs to be around for all the mayhem.

Finally, Melissa Ordway (Abby) and Mishael Morgan will make special appearances on The Price Is Right. They’ll step up as guest models in the week ahead. The Young and the Restless viewers may want to tune in! If you’re down for some gameshow fun, watch out for Ordway on June 5 and Morgan on June 6.

That’s it for comings and goings! We’ll keep you posted as other Y&R details emerge. Stay tuned to the CBS soap and don’t forget to check CDL often for the latest Young and the Restless spoilers, updates, and news.