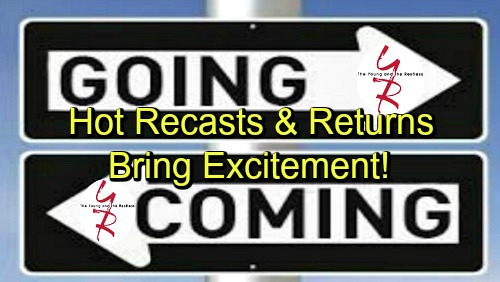 The Young and the Restless (Y&R) spoilers reveal that there’s some comings and goings news to share. For starters, we should mention a returning character with a brand-new face. Loren Lott will make her debut as Ana Hamilton on November 28. Ana will catch Devon (Bryton James) off guard when she shows up at his penthouse. She’ll want to check on her grieving brother and hopefully lift his spirits.

Sadly, it’ll be tough to pep Devon up. He’s been struggling with his loss more than ever lately. That’s probably due to a combination of busy loved ones and the holidays. Devon’s lonely, broken and lost without Hilary (Mishael Morgan) by his side.

As a result, it looks like Devon has turned to drugs for comfort. After Cane (Daniel Goddard) finds a suspicious baggie, he’ll confront Devon about his dangerous coping strategy. Cane, Nate (Brooks Darnell) and Ana will all fear the worst. If they can’t help Devon get a grip, he could really lose control of his life.

Next, let’s talk about another recast. Since Max Ehrich wasn’t available, Zach Tinker has been tapped to replace him as Fenmore “Fen” Baldwin. The Young and the Restless spoilers say Fen will give Michael (Christian LeBlanc) and Lauren (Tracey E. Bregman) a shock on December 3. They’ll be happy to see their son, but could he have an ulterior motive for returning to town? It seems likely!

Tristan Lake Leabu’s (Reed) return is also inching closer. Here’s your reminder that Reed will arrive back in GC on December 10. That should bring some added stress for Victoria (Amelia Heinle), who’s keeping a stunning secret. Will Reed come home after a huge break in the case or will he part of how the truth comes out? Regardless, Reed’s going to want answers about J.T.’s (Thad Luckinbill) death.

In other Y&R news, Eric Braeden (Victor) has returned to film more scenes. On November 20, Braeden tweeted, “Back on set with my long lost daughter!!” It was his Twitter caption for a fun pic with Amelia Heinle (Victoria). Victor will appear for a phone call with Nikki (Melody Thomas Scott) this week as well as a video chat with Nick (Joshua Morrow), but we’re all eager to see his official return.

There’s no word yet on exactly when Victor will hit town again, but the wait won’t last forever. Based on Braeden’s tweet, we should see him home just in time for Christmas. We’ll give you updates as other Young and the Restless details emerge. Stay tuned to Y&R and don’t forget to check CDL often for the latest Young and the Restless spoilers, updates, and news.

.⁦@ameliamheinle⁩ back on set with my long lost daughter!! pic.twitter.com/JHx6PKS6i4