BY Heather Hughes on November 23, 2018 | Comments: one comment
Related : Soap Opera, Spoiler, Television, The Young and the Restless 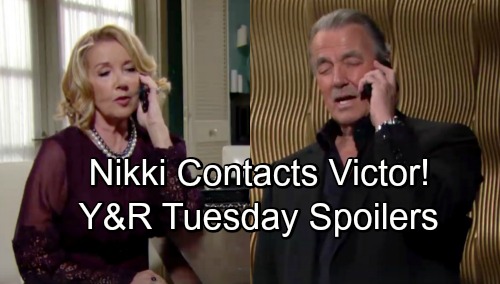 The Young and the Restless (Y&R) spoilers for Tuesday, November 27, tease that Mariah (Camryn Grimes) will have to do some soul-searching. She’s been conflicted about her plan to dupe Tessa (Cait Fairbanks) into thinking they’ve reunited. Mariah claims it’s because she hasn’t forgiven Tessa, but it’s clear that there’s some lingering love, too. After all, Mariah wouldn’t be torn about it if she didn’t care.

On Monday’s new Y&R episode, November 26, Mariah has to consider what she really wants and what her future should look like. She’ll try to decide if Tessa’s still going to be part of that future. Of course, some new bombshells should bring changes. A lot of lying’s been going on, so some big revelations will hit hard.

In Friday’s Y&R episode, Victoria (Amelia Heinle) urges Tessa to leave town and threatens to pin J.T.’s (Thad Luckinbill) murder on her. She even had cameras installed in the studio to find out where the evidence was hidden. That means Tessa now knows Mariah’s been lying. She’s been deceiving Mariah as well, so maybe they’ll come clean on Monday and try to tackle this situation as a team.

You can bet Mariah will NOT be happy about Victoria and the cover-up crew’s plan. There’s absolutely no way Mariah would let Tessa take the fall for a murder she didn’t commit, especially when there was no murder at all. Sharon’s (Sharon Case) sure to get an earful for her cooperation in this eventually. The girls’ night gang is about to have a new threat – and her name’s Mariah Copeland!

Meanwhile, Nikki (Melody Thomas Scott) will enjoy the calm before the storm. She’ll speak on the phone with Victor (Eric Braeden) and hope she gets to see him again soon. They’ll talk about how much they missed each other at Thanksgiving. Everything will seem quite ordinary, but Nikki’s actually stuck in a crisis. She’ll undoubtedly have to bring Victor in on this drama down the road.

Other Young and the Restless spoilers say Cane (Daniel Goddard) will grow concerned. He’ll have grieving Devon (Bryton James) on his mind in Monday’s episode. Cane will find a baggie containing drugs at some point this week, so Devon will be busted. He’ll have to answer some tough questions about his apparent downward spiral.