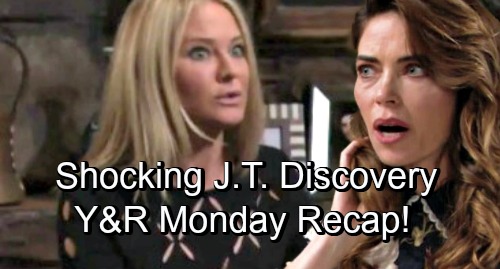 The Young and the Restless (Y&R) spoilers for Monday, November 26, tease that Phyllis (Gina Tognoni) and Nick (Joshua Morrow) will enjoy their new living arrangement. They’ll watch football on the couch and recall the hookup that started it all at Summer’s (Hunter King) apartment. After making love, Phyllis will leave the room wearing only a T-shirt. Meanwhile, Nick will answer the door shirtless.

Sharon (Sharon Case) will be there to get a book Faith (Alyvia Alyn Lind) left behind. When she spots Phyllis, she’ll realize her enemy’s now living with Nick. Sharon will deliver a snarky comment or two before taking off. Once they’re alone, Phyllis will pick up on Nick’s agitated mood. She’ll wonder if he really wants her there, but he’ll promise he’s committed to this.

Other Young and the Restless spoilers say Rey (Jordi Vilasuso) and Mia (Noemi Gonzalez) will have a heated argument. He’ll try to figure out if she came back to work things out with him or get with Arturo (Jason Canela). Mia will hint that she wanted Rey to be jealous and fight for her. They’ll end up sharing a steamy kiss and moving toward the bedroom.

Soon after, Mia will pump the brakes. She’ll feel like Rey’s heart isn’t in it, so she’ll want to hold off on a sexual reunion. They’ll ultimately open up to each other a bit and make some progress. Mia will assure Rey that she can be trusted, but something tells us that may not be true!

Speaking of trust, none of it will be on display at Tessa’s (Cait Fairbanks) studio. Victoria (Amelia Heinle) will shut down Tessa’s lie about not knowing the reason for this visit. When Tessa vows to call the cops, Victoria will insist that’s not happening. She’ll bring up the blackmail and urge Tessa to leave Genoa City.

If Tessa doesn’t do as she’s told, Victoria will plan to accuse her of J.T.’s (Thad Luckinbill) murder. She’ll spin a story about how J.T. found out Tessa’s plot to play Nikki (Melody Thomas Scott) and Noah (Robert Adamson). Victoria will suggest that in her version of events, Tessa killed him when she was confronted.

Y&R spoilers say Tessa will pipe up about the evidence she still has, but Victoria will have a solution for that, too. She’ll admit she had someone install hidden cameras, so she knows the thumb drive’s in the stuffed bear. Victoria will yank it out and take back the money as well.

Next, Victoria will demand answers about J.T.’s corpse. Tessa will stammer that she had nothing to do with moving the body. She blackmailed them and that’s it. Victoria will snarl that Tessa had better be telling her the truth or there’ll be consequences.

Once Victoria returns home, she’ll find Sharon (Sharon Case) and Billy (Jason Thompson) sharing a warm moment. They’ll be commiserating over the pain of Nick and Phyllis shacking up so fast. Billy will exit, so that’ll leave Victoria to explain the cover-up crew’s latest problem. She’ll tell Sharon she believes Tessa’s claim that she didn’t move the corpse.

Naturally, Sharon will freak out over someone else knowing their secret. This mess just keeps getting messier! Over with Jack (Peter Bergman) and Kerry (Alice Hunter), they’ll bond by the fireplace at the Abbott house. The Young and the Restless spoilers say they’ll reflect on their childhoods and romantic histories. Kerry will confess she’s never been able to find that special someone meant for her.

After Jack dashes off to get more wine, he’ll come back to find that Kerry’s gone. A text will let Jack know she called a car since she had to be at the office early. It seems Kerry’s afraid of diving in, so Jack will just have to proceed with caution and hope for the best.