The Young and the Restless Spoilers: Vickie Threatens To Pin J.T. Murder On Tessa, Makes Mariah a Liar 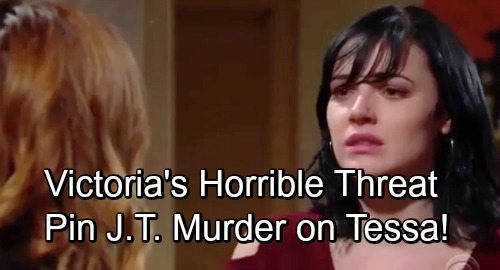 The Young and the Restless spoilers tease that Vickie (Amelia Heinle) isn’t going to gamble that Tessa (Cait Fairbanks) will choose to remain silent. The departed J.T.’s (Thad Luckinbill) one-time fiance will directly confront her in an attempt to drive home the point that all parties involved in the accidental death coverup will be in danger if Tessa tells anyone what’s been learned.

Tessa’s reveal as the blackmailer makes sense, as Y&R telegraphed her as the culprit for many weeks. It’s not yet known how much of the story she’s told Mariah (Camryn Grimes) about Crystal (Morgan Obenreder) is actually true. But assuming that Miss Porter does owe money to the coyotes who helped her sister relocate to a safe spot in Canada, then Tessa did extort money from Nikki (Melody Thomas Scott) in order to pay off debts to as yet unseen underworld figures.

A major problem with Vickie’s impulse act to threaten Tessa that they will pin J.T’s murder on her is that it makes Mariah a liar. Mariah told Tessa that she withheld the blackmailer reveal from Sharon (Sharon Case). The gist of Mariah’s tale involved the coverup crew protecting themselves and a desire to keep their relationship alive. Grimes’ character made that risky decision as part of her plan to regain Tessa’s trust in an attempt to learn if J.T.’s body was moved.

Mariah already knows that Tessa admitted to having at least one extra copy of the memory stick that contained devastating surveillance footage of the coverup crew putting a rug with J.T.’s body into a car inside Vickie’s garage. Mariah’s not sure if Tessa actually donated all quarter-million dollars to local charities as was claimed and she also doesn’t know if Tessa did, in fact, take possession of Mr. Hellstrom’s corpse in order to gain an extra, gruesome level of leverage.

Fairbanks has been tasked with turning her once-vulnerable character into a grifter. Ironically, she’s taken on a task that once-tenured and then returned cast member Luckinbill accepted last year. He agreed to play a devolved J.T., who descended into madness because of supposed career setbacks.

It feels as though Tessa has already crossed the soapy line and could currently be on her way to being written out of the show. Even if she isn’t the sole mastermind of pressure being applied to the coverup crew, Tessa has no storyline room left once current proceedings reach their inevitable conclusion.

The likelihood that any coverup crew member will go to jail, leave town, or be killed in a standoff is as close to zero as is possible. However, Tessa could easily be arrested for her crimes. She could also bolt from Genoa City at any point, or face a fateful end due to building, perilous circumstances. Any of the seeming outcomes is rather sad, as Fairbanks has an engaging presence and Tessa had plenty of potential until she was purposely made into an evil blackmailer.