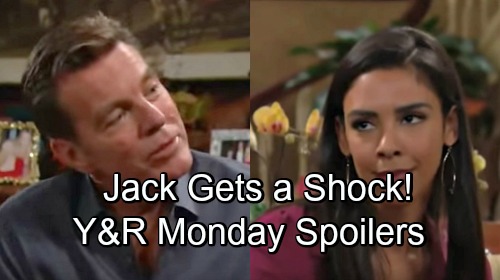 The Young and the Restless (Y&R) spoilers for Monday, November 26, tease that Kerry (Alice Hunter) will catch Jack (Peter Bergman) off guard. On Friday, Jack makes Kerry feel welcome at the Abbott family’s gathering. They share some lovely moments, so things could be moving in the right direction.

Will the Thanksgiving festivities bring a turning point for Kerry? It’d probably shock Jack if she planted a kiss on Monday. Kerry doesn’t seem like the kind of gal who wants to move too fast, but a little lip lock wouldn’t hurt. Of course, it would also stun Jack if Kerry suggested sticking to friendship. That’s not what he wants to hear, but Jack might try to accept it.

Regardless, Y&R appears to be gearing up for a romance here. Even if Kerry puts her guard up, she may relent and let Jack in her heart eventually. Across town, Phyllis (Gina Tognoni) will settle into Nick’s (Joshua Morrow) place nicely. They’ll enjoy watching some TV together, but that’ll probably just spark a sex session. When it comes to Nick and Phyllis, everything leads to sex!

Unfortunately, Sharon (Sharon Case) will have the worst possible timing on Monday. The Young and the Restless spoilers say she’ll catch Nick and Phyllis in the middle of something. It sounds like Sharon will walk in on them making love, which should obviously be all kinds of awkward.

To make matters worse, Nick’s reaction to Sharon will leave Phyllis fuming. She’ll think it’s clear that he’s catering to his ex’s wants and needs. A “Phick” shouting match is looming, so Nick’s love life will be a total disaster.

In the meantime, Victoria (Amelia Heinle) will make herself crystal clear to Tessa (Cait Fairbanks). She’ll deliver a fierce threat, so she may warn Tessa to keep her mouth shut or else. Victoria may even have some dirt to back her up. She’ll do whatever it takes to keep Tessa in line.

This confrontation is important for a couple reasons. For starters, Tessa still has a thumb drive she could use against the cover-up crew. They’d be wise to avoid provoking her! However, the crucial info to come out of this will be Mariah’s (Camryn Grimes) deception. Mariah assured Tessa that she never exposed her as the blackmailer, but Tessa will soon know that’s not true.

Tessa can’t judge Mariah since she’s lying to her as well, but it’ll sting anyway. Y&R watchers are aware of Tessa’s honesty issues, but her feelings for Mariah have always been genuine. Once she realizes Mariah’s playing games with her heart, Tessa could crumble a bit. Then again, there’s a chance Tessa knows already! She’s skilled at running scams, so maybe she’s been playing right along.

Regardless, The Young and the Restless spoilers hint that there’s another side to Tessa’s story. She looks awfully shady with her stuffed money bear, but Y&R has more to reveal. Tessa is a complex gal with complex motives, so Mariah’s view of her will remain messy.

Monday’s episode will give fans some great scenes. We’ll give you updates as other news comes in. Stay tuned to the CBS soap and don’t forget to check CDL often for the latest Young and the Restless spoilers, updates and news.