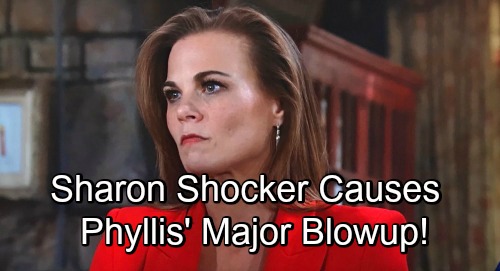 The Young and the Restless (Y&R) spoilers tease that Sharon (Sharon Case) will make a shocking discovery next week. She’ll catch Nick (Joshua Morrow) and Phyllis (Gina Tognoni) in the middle of something, so it’s easy to assume it might be sex. That’s pretty much all Phyllis and Nick do, right?

Y&R fans might see another round of “Phick” sexy time at Dark Horse. A late night could turn into an opportunity to make love as well as a chance for Sharon to walk in on them. Then again, the Young and the Restless might as well put Nick’s fancy house set to good use. Sharon might stop by to discuss something regarding Faith (Alyvia Alyn Lind) or Christian (Jude and Ozzy McGuigen).

Nick and Phyllis might be busy getting it on when Sharon waltzes in. Genoa City residents often forget to lock their doors, so Sharon might enter on her own if there was no answer. That could lead to an eyeful of Nick and Phyllis’ hot encounter.

Even though Sharon declared she was done with Nick, she still cares about him deep down. This kind of thing would certainly sting. It might give her something else to bond with Rey (Jordi Vilasuso) over, but not before Nick does damage control. His recent dance fantasy proves Sharon is very much on his mind and in his heart.

The Young and the Restless spoilers hint that Phyllis will battle insecurities soon. She’ll begin to feel like a rebound and let’s be honest: she is. Nick doesn’t love Phyllis – at least not in THAT way. He’ll always love her as Summer’s (Hunter King) mother and a good friend, but right now she’s just a warm body in his bed. If Sharon would take Nick back, he’d toss Phyllis out of the house in a heartbeat.

After the awkward incident with Sharon, Nick might try to make her the priority. It could become very clear to Phyllis that Nick’s all about Sharon and her needs. At that point, Phyllis’ doubts should turn to rage. She may be mad at Nick for drawing her into this romance, but she’ll mostly be mad at herself for thinking it could work.