The Young and the Restless Spoilers: New Mystery Threat Brings Down The Newmans – Victor Fights Back To Save Family 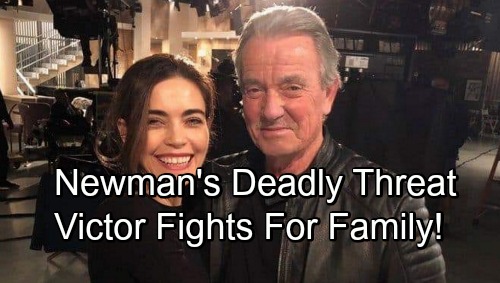 The Young and the Restless (Y&R) spoilers tease that more trouble is headed Nikki’s (Melody Thomas Scott) way. She’s obviously stuck in quite a jam thanks to the huge secret she’s keeping. Nikki accidentally killed J.T. (Thad Luckinbill) while defending Victoria (Amelia Heinle), which kicked off the cover-up plot and turned her life upside down.

The girls’ night gang is currently trying to handle Mariah’s (Camryn Grimes) newfound knowledge as well as the threat Tessa (Cait Fairbanks) poses. Victoria will continue to take charge of all the drama as Nikki, Phyllis (Gina Tognoni) and Sharon (Sharon Case) back her up. Unfortunately, a new threat is about to emerge and Nikki will need more than her sneaky posse to get a grip on it.

By now, many Young and the Restless spoilers for November sweeps have played out. However, there’s one that’s still to come and it could leave Nikki in a panic. Y&R fans can expect another risky situation to strike. Victor (Eric Braeden) will return from his extended business trip to help deal with the mayhem that’s set to unfold.

According to Soap Opera Digest, “This power couple will need to unite like never before when a mysterious figure tries to take down the Newmans. Desperate times call for desperate measures, and Victor and Nikki will stop at nothing to protect their family.” Since Nikki’s involved here, it seems likely the J.T. case will come into play somehow.

Tessa saved herself a secret thumb drive, but it’s sewed up tight in her teddy bear. It seems like an insurance policy, not something she wants to unleash and cause chaos for kicks. Plus, Tessa has already been revealed as the blackmailer. To have her be behind another threat would be awfully anticlimactic.

With that in mind, it’s possible someone else knows what really happened that fateful night in April. Does this person also have evidence that could be used against Nikki and the others? After all, that’d be the easiest way to attack the Newmans. This dirt could spark quite a scandal for Newman Enterprises if it gets out.

Again, Nikki’s involvement also points to the J.T. angle. She probably wouldn’t have time for Victor’s issues unless she was responsible for them. If more proof surfaces, Tessa might be blamed initially. That could bring some dangerous accusations, which could throw off Mariah’s plan in a big way.

Of course, things could point in another direction soon after. Is this mysterious figure already lurking in Genoa City? What’s his or her motive for targeting the Newmans? Will this lead to the hospital trip that’s been teased for Nikki down the road?