The Young and the Restless Spoilers: Victoria vs. Tessa, Schemers Battle It Out for Control – Sneaky Tactics Hit Where It Hurts 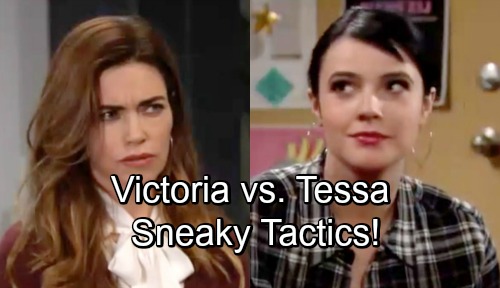 The Young and the Restless (Y&R) spoilers tease that Victoria (Amelia Heinle) will put her own plan in motion. The cover-up crew knows Tessa (Cait Fairbanks) is a serious complication that could put their freedom in jeopardy. They can’t trust her, so they’ve tasked Mariah (Camryn Grimes) with deceiving Tessa and helping to make this problem go away.

However, Mariah will face some challenges along the way. She doesn’t want to reunite with Tessa, but that’ll probably change over time. Mariah’s clearly conflicted about lying and that wouldn’t be the case if she was completely done with her. The fact that she cares means something, which is why Victoria can’t leave their fates in Mariah’s hands.

Mariah secured one thumb drive in Tuesday’s episode, but Victoria realizes, correctly, that she can’t trust that it’s the only one. The Young and the Restless spoilers Victoria will level a threat on next week’s new Y&R episodes, November 26-30. Could that be directed at Tessa? Even if it’s not, a threat indeed has to be coming.

At some point, Victoria or even Phyllis (Gina Tognoni) may tip Tessa off to what’s going on. Tessa will inevitably discover that Mariah lied about not revealing her as the blackmailer, which should bring red flags about Mariah’s decision to patch things up. Since Tessa has a backup thumb drive, this could certainly spell trouble for the cover-up crew.

Nevertheless, there’s some good in Tessa deep down. She’s made plenty of mistakes, but her feelings for Mariah have always been genuine. That could save Sharon (Sharon Case) and the others, but what about Tessa? Y&R spoilers state that Victoria will be coming after her hard! There are several strategies she could use and they’d all put Tessa in a real bind.

It’s possible Victoria will somehow try to pin all this on Tessa. Victoria may be able to cook something up with a little help from Victor (Eric Braeden). He’s a pro when it comes to scheming, so setting Tessa up for J.T.’s (Thad Luckinbill) murder probably wouldn’t be too difficult.

Another option would be digging into Tessa’s past and threatening to make something resurface. That could stir up some danger that Tessa doesn’t need right now. There’s even a chance Victoria will strike the lowest blow of all and threaten to drag Crystal (Morgan Obenreder) into this.

Mariah hasn’t mentioned the smuggling story yet, presumably for Crystal’s protection. Still, Victoria has Newman minions on her side. It’d be easy to uncover that dirt and use it against Tessa. After all, Crystal is her Kryptonite!

Whatever the case, The Young and the Restless spoilers say this Victoria and Tessa battle is about to heat up! Will Tessa fight back or get stuck in a world of Newman drama? Will Mariah be forced to step up and save her? We’ll give you updates as other Y&R news comes in. Stay tuned to the CBS soap and don’t forget to check CDL often for the latest Young and the Restless spoilers, updates and news.