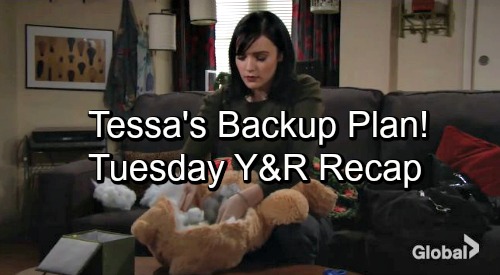 The Young and the Restless (Y&R) spoilers for Tuesday, November 20, tease that Mariah (Camryn Grimes) will meet up with Sharon (Sharon Case). She’ll admit she lost her nerve and hasn’t been to see Tessa (Cait Fairbanks) yet. Sharon will give Mariah a pep talk to nudge her into the ruse. She’ll understand that lying to Tessa won’t be easy, but Sharon will trust that Mariah can pull it off.

Afterward, Sharon will have a chat with Rey (Jordi Vilasuso). He’ll think she’s been avoiding him because of Mia (Noemi Gonzalez) and all her drama. Rey will talk about how Mia doesn’t think before she acts. Sharon will admit she does the same thing sometimes, but they’ll agree that putting some distance between them is for the best.

Back with Mariah, she’ll show up at Tessa’s studio and carry out the charade. Mariah will note that Sharon admitted J.T. (Thad Luckinbill) was dead. However, she’ll fib that her mom wouldn’t reveal the details. Mariah will also lie about not revealing Tessa as the blackmailer. She’ll claim she didn’t want to put the person she loves at risk like that.

Tessa will be grateful and wonder what she can do to mend things between them. Mariah will want Tessa to hand over the flash drive that contains the footage. She’ll also want Tessa to donate the money to charity before she moves back in. After Mariah takes off, Tessa will stuff the cash in a teddy bear along with a backup flash drive. She’ll sew it closed and place it in a box that’s taped closed.

At the police station, Y&R fans will see another chat between Rey and Sharon. He’ll point out that Victoria (Amelia Heinle) seemingly knew J.T.’s corpse was gone. Rey will mention that the soil samples still had traces of J.T.’s DNA, but he’ll swear Sharon to secrecy. They’ll eventually shift gears to Mia and how she wasn’t over Arturo (Jason Canela) when Rey married her.

Rey will confess that he became distracted at work, which led to relationship troubles. Mia cheated and caused him great pain, but he still wants to fix what’s broken. Later, Mariah will give the flash drive to Sharon and return to Tessa. They’ll tell each other more lies before Mariah promises to move back in the next morning.

Meanwhile, Victoria will watch the surveillance footage with Sharon. They’ll realize this could’ve done serious damage if it’d been released. Victoria will smash the flash drive, but Sharon will worry about other copies being out there. She’ll know they can’t take Tessa’s word for it. The Young and the Restless spoilers say Victoria will grasp that and have a plan to take care of business.

At the Ashby house, the family will be somber about Lily’s (Christel Khalil) situation. Cane (Daniel Goddard) will mention that Neil (Kristoff St. John) moved closer to Lily’s facility. He’ll hope that it’ll help, but the twins will remain upset. Charlie (Noah Alexander Gerry) and Mattie (Lexie Stevenson) will be bummed about trying to celebrate Thanksgiving in the slammer.

After Devon cancels on going with the Ashbys, Nate (Brooks Darnell) will find him having a party at home. He’ll blast Devon for bailing on his family and threaten to call the police due to the noise. We’ll give you updates as other Young and the Restless news comes in. Stay tuned to Y&R and don’t forget to check CDL often for the latest Young and the Restless spoilers, updates and news.