BY Sean O'Brien on November 19, 2018 | Comments: one comment
Related : Soap Opera, Spoiler, Television, The Young and the Restless 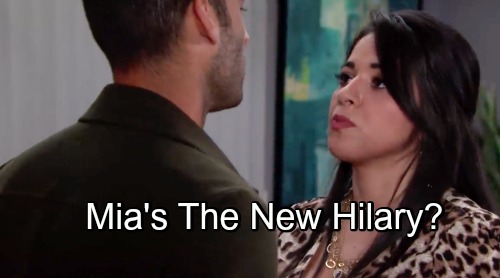 The Young and the Restless spoilers documented the great run of Mishael Morgan as Hilary. Genoa City has recently welcomed Mia (Noemi Gonzalez), a person who surely possesses an electric personality, Yes, this new character obviously projects into a Hilary-type role.

To be clear, no one replaces a terrific talent like Morgan, or any other past soap cast member who killed it with regularity. Instead, what’s being asserted is that Morgan’s choice to voluntarily leave the cast created the need for a similar personality type character (like a Hilary) to be invented. Mia Rosales appears to be that.

She arrived in town bent on stirring the pot within an existing family, the Rosales’. As devoted viewers recall, Hilary propelled into this fictional Wisconsin town five years ago intending to fully disrupt the Winters’ family, which she fully succeeded in doing many times.

The parallels between these characters exist at surface levels due to the few episode status that Gonzalez has achieved. However, storyline setups and eye tests provide enough early evidence to believe that executive producer and head writer Mal Young intends to swap out one character for the other.

Sure, if Y&R fans hear Mariah (Camryn Grimes) begin talking about Mia as a co-host of GC Buzz, then the comparison will be undeniable. In the meantime, let’s pair who Hilary was with who Mia already is.

Both women are obviously brilliant and beautiful. The double-play appeal makes them threats to business rivals, to any woman who has a seemingly secure man, and to various eligible male targets who Mia eyes.

Mia’s makeup artist background has already allowed her to create contacts and clients among GC’s power players. Her ability to bond with the upper crust means that she has Jill (Jess Walton) potential. That reference winks back to this legacy character’s (as originally played by a different actor) work as a nail technician, which led to a friendship with Katherine Chancellor (played by the late, great Jeanne Cooper) and on from there.

Hilary was able to win Neil’s (Kristoff St. John) heart after initially trying to blame him for her mother’s death. Fierce fallout within Mr. Winters’ family established battle lines and eventually secured human territory. That turnabout was the first major display of Hilary’s power and potential. The romance with Devon (Bryton James) allowed Morgan and her colleagues to deliver truly great work that endures.

Mia has already reignited a sibling war between Rey (Jordi Vilasuso) and Arturo (Jason Canela) that extends to collateral characters. Initial impressions will deepen and daytime enemies will therefore be established. But Mia is likely to gain a variety of allies as well because she’ll be seen as a similar soul.

No two separate characters are ever fully comparable. Instead, the force of nature that was Hilary can always be fondly recalled while the Mia maelstrom that’s begun to take hold is observed with appreciation. Gonzalez looks to be a great casting and is exhibiting strong potential.