The Young and the Restless Spoilers: Summer Discovers She’s Pregnant – Phyllis To Be A Grandma In 2019?

BY hellodrdavis on November 19, 2018 | Comments: 2 comments
Related : Soap Opera, Spoiler, Television, The Young and the Restless 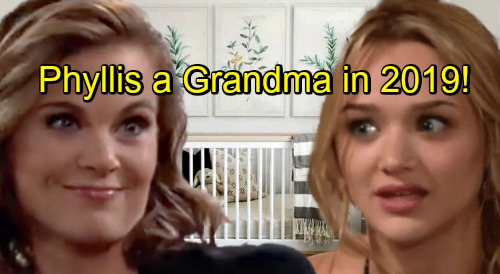 The Young and the Restless spoilers tease that Summer (Hunter King) will focus her energies this holiday season on Kyle (Michael Mealor). She didn’t want Kyle when he was available to her, but now that he’s with Lola (Sasha Calle), she wants him more than ever. According to Summer, she discovered how much she needed Kyle right after Billy (Jason Thompson) slept with her then dumped her.

Summer seems to think that she can just put the Billy situation behind her and move on with her life just like that. She quickly made up with Phyllis (Gina Tognoni) after her Billy escapade, but didn’t it just seem too easy? Phyllis was devastated by Billy’s decision to sleep with Summer, yet she forgave Summer almost immediately.

Instead of berating Summer, Phyllis put the whole situation on Billy and has been taking it out on him at Jabot. But what if there turns out to be a new wrinkle in the whole Billy/Summer/Phyllis relationship? There’s a distinct possibility that Summer ended up pregnant from her night with Billy.

If she did, then everything about her relationship with her mother is going to change. Imagine Phyllis a grandmother of Billy’s baby! That would probably be too much for Phyllis to bear, in addition to all the hurt she’s already suffered at the hands of Billy and Summer.

From a timing standpoint, between now and the end of the year would be about when Summer could find out that she is pregnant. It would certainly make the holiday season a memorable one if Summer had to break the news to everyone that she is carrying Billy’s child.

Of course, it would probably ruin her chances (if she indeed has any) with Kyle and would put her right back into her mother and Billy’s orbit. Phyllis would have to make a decision about how she’s going to handle the situation – would she support Summer or keep her distance since the baby is Billy’s?

Do you think Summer is going to find out that she’s pregnant? Stay tuned to the CBS soap and don’t forget to check CDL often for the latest Young and the Restless spoilers, updates, and news.