BY Heather Hughes on November 19, 2018 | Comments: one comment
Related : Soap Opera, Spoiler, Television, The Young and the Restless 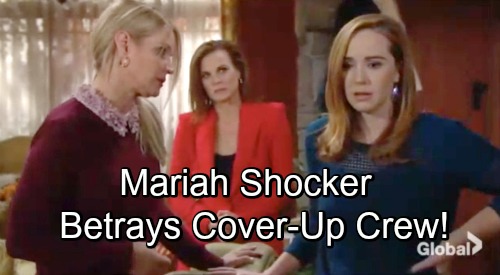 The Young and the Restless (Y&R) spoilers tease that Mariah (Camryn Grimes) will be tormented by conflicted feelings. She’ll find herself torn between protecting Sharon (Sharon Case) and protecting Tessa (Cait Fairbanks). Both of them lied to Mariah’s face for months about something huge, so she’ll have to push through some pain here.

In Monday’s new Y&R episode, November 19, Mariah hears the sob story of big, bad J.T. (Thad Luckinbill) and how Nikki (Melody Thomas Scott) was just defending her daughter. Victoria (Amelia Heinle) was under attack, so Nikki did what she had to do. The others didn’t want Nikki to go down on bogus murder charges, which led to the cover-up.

Since Mariah accepts this excuse, why shouldn’t she accept Tessa’s as well? The smugglers were violent thugs who attacked Tessa and followed Mariah around town. They also knew Crystal’s (Morgan Obenreder) location, so Tessa was willing to do whatever it took to protect the people she cared about.

That sounds awfully similar to Nikki’s situation, doesn’t it? The only difference is no one died thanks to Tessa’s actions! She simply demanded money that filthy rich Nikki will never miss and saved her loved ones in the process.

Nevertheless, Mariah will do the dirty work of the girls’ night gang – or at least she’ll try to. They’ll want Mariah to delete all the surveillance footage and help them keep Tessa in line. To do that, Mariah will have to pretend things are hunky-dory. Tessa will be thrilled that Mariah still wants to be with her, but she’ll actually be getting played.

Of course, Mariah has been ranting about honesty for days. Truth, truth, truth… That’s all we’ve been hearing! Mariah’s guilty conscience will inevitably hit fast and hard. Plus, she’ll start to understand Tessa’s perspective, which all adds up to a genuine “Teriah” reunion.

However, there’ll be a big problem. The murder coven (as social media so affectionately calls them) will still be dead-set on taking Tessa down. Victoria, Sharon, Nikki and Phyllis (Gina Tognoni) will band together on this. Once Victor (Eric Braeden) reenters the picture, he should get involved, too. The Young and the Restless spoilers say Victor and Nikki will prove they’re a true power couple.

Tessa’s got a target on her back, but never underestimate the power of a determined redhead in love. Mariah has experience dealing with Victor thanks to the whole haunting Sharon as Cassie (Camryn Grimes) plot. She may have to go back to her scheming roots if she wants to stop the madness.

Meanwhile, Rey (Jordi Vilasuso) will also be closing in on the culprits. The J.T. chaos is turning into a real mess, but it’s bound to be entertaining. The Young and the Restless spoilers say Nikki will land in the hospital by the end of all this, so it’s clear that this storyline will get pretty intense.

Y&R fans won’t want to miss the shockers ahead. We’ll give you updates as other news comes in. Stay tuned to the CBS soap and don’t forget to check CDL often for the latest Young and the Restless spoilers, updates, and news.