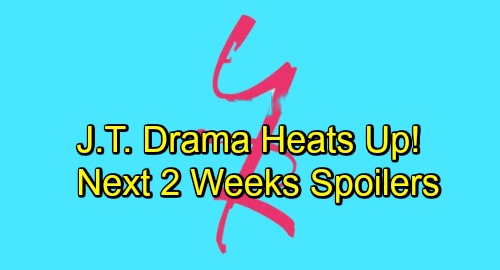 The Young and the Restless (Y&R) spoilers for the next two weeks tease that some tough situations are on the way. During the week of November 19-23, Abby (Melissa Ordway) will face a difficult choice. She’s fallen hard for Arturo (Jason Canela), but she’s afraid of getting her heart broken. Now that Mia’s (Noemi Gonzalez) is in Genoa City, it brings risk and competition to this relationship.

However, some advice from Jack (Peter Bergman) will change the game. Despite Mia’s blatant pot-stirring, Abby will decide she’s not giving up her romance without a fight. Meanwhile, Billy (Jason Thompson) will give Victoria (Amelia Heinle) some support. She’ll lean on her ex as her stress level skyrockets.

Naturally, that’ll be due to some new J.T. (Thad Luckinbill) revelations. After Mariah (Camryn Grimes) confronts Sharon (Sharon Case) and scores an admission, she’ll fill her in on Tessa’s (Cait Fairbanks) actions. Once the rest of the cover-up crew is brought in the loop, Mariah will be backed into a corner. They’ll all want her to feign forgiveness and help them clean up this Tessa mess.

Mariah will grudgingly agree to make Tessa think they still have a shot at being together. There’s a good chance they really do, which is why Phyllis (Gina Tognoni) will push for another option – one they’ll take care of on their own. Victoria will do her best to handle that, but some hurdles will emerge right away.

On Thanksgiving in GC, Victoria and Nikki (Melody Thomas Scott) will face a total nightmare. Y&R spoilers say some J.T. investigation details will leave them reeling. Sharon will be busy serving the homeless with Rey (Jordi Vilasuso), but the news will reach her soon enough. During the week of November 26-30, Sharon will deal with quite a shocker. She may fear exposure isn’t too far off.

Elsewhere, Jack will try to woo Kerry (Alice Hunter). He seems to feel a spark, so he’ll decide to go for it. Jack would prefer to have Phyllis (Gina Tognoni) back in his life, but she’s moving forward with Nick (Joshua Morrow) for now.

Other Young and the Restless spoilers say Victor (Eric Braeden) will get in touch with Nikki (Melody Thomas Scott). Is it time for him to get involved in all the death drama? Victor has unique skills and minions galore, so Nikki may have to bring him into the picture.

Next, Kyle (Michael Mealor) and Lola (Sasha Calle) will hit a speed bump. It seems likely that Summer (Hunter King) will be to blame. She tends to be their main source of conflict, so we’ll see if they can get past it again.

Finally, a familiar face will walk back into Devon’s (Bryton James) life. He’ll be pleased to see his sister, Ana Hamilton (Loren Lott), back in town. The Young and the Restless spoilers say Ana will lift Devon’s spirits as he continues to battle grief.

Keep in mind that a new episode won’t air on Thanksgiving, so this year’s holiday special will pop up on Friday, November 23, instead. As for the rest of the next two weeks, Y&R fans can enjoy a wild ride! We’ll give you updates as other Y&R details emerge. Stick with the CBS soap and don’t forget to check CDL often for the latest Young and the Restless spoilers, updates, and news.