BY Marcy Cohen on November 17, 2018 | Comments: one comment
Related : Soap Opera, Spoiler, Television, The Young and the Restless 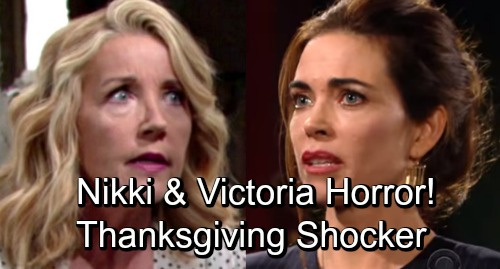 The Young and the Restless (Y&R) spoilers tease that Nikki (Melody Thomas Scott), Victoria (Amelia Heinle), Sharon (Sharon Case) and Phyllis (Gina Tognoni) will remain on edge. The J.T. (Thad Luckinbill) investigation is pushing these four to their limit. They made a pact to keep what happened on girls’ night under wraps, but the secret is starting to spread.

Y&R suddenly decided Tessa (Cait Fairbanks) is a brilliant criminal mastermind with loads of tech experience, so she cracked this case long before Rey (Jordi Vilasuso). To be fair, Rey probably should’ve spent a little less time flirting with Sharon. He might be closer to proof by now if he’d focused on digging around.

Nevertheless, Rey is indeed on the right track. He’ll remain suspicious of the “charity project” group and what they’re hiding. As for Mariah (Camryn Grimes), she’ll have some questions for Sharon. The Young and the Restless spoilers say they’ll have a tense conversation about the deadly cover-up on Monday’s new Y&R episode, November 19. Mariah will relay what she’s learned and try to figure out how things went so horribly wrong.

Sharon will probably feel a bit better just to get it off her chest. She undoubtedly hated lying to Mariah, but she didn’t want to drag her into this. Now Mariah could be implicated when the truth inevitably comes out, but Sharon will take steps to make sure that doesn’t happen. She’s all about shielding her kids from drama.

Sharon will get a break from the drama herself when she serves Thanksgiving dinner with Rey (Jordi Vilasuso). The rest of the Rosales family will pitch in as they help the homeless on this special holiday. Meanwhile, Victoria and Nikki will also try to relax – which will be much harder once Sharon and Mariah revel what Tessa knows. They’ll hope they can settle in for a fun family Thanksgiving, but trouble’s brewing. It turns out turkey day will be ruined by the cops closing in!

As the J.T. investigation heats up, Nikki and Victoria will fear the worst. Will the GCPD reveal shocking new evidence? Could Victoria and Nikki actually be arrested on Thanksgiving? This year’s holiday episode will air on Friday, November 23, so anything’s possible when a major cliffhanger’s looming!