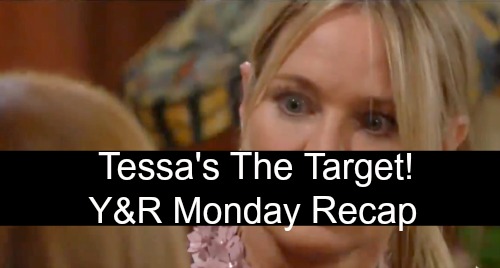 The Young and the Restless (Y&R) spoilers for Monday, November 19, tease that Mariah (Camryn Grimes) will demand answers from Sharon (Sharon Case). She’ll insist that she knows about J.T. (Thad Luckinbill) and what happened that night. Sharon will try to play dumb, but Mariah won’t put up with that. She’s had enough deception lately, so she’ll push her mom to divulge the truth.

After Sharon spills the story, she’ll assure Mariah that it’s been a nightmare. They never wanted any of this to happen, but they didn’t want Nikki (Melody Thomas Scott) to land in prison either. When Sharon asks how Mariah learned the truth, she’ll confess that Tessa (Cait Fairbanks) has been blackmailing them.

Next, the rest of the cover-up crew will arrive for an emergency meeting. They’ll back Sharon up on how this was never their intention. However, all the ladies will agree that any of them would’ve done the same to protect their kids. Victoria (Amelia Heinle), Phyllis (Gina Tognoni) and Sharon certainly don’t blame Nikki for stepping up.

Of course, they’ll also have to figure out how to handle Tessa. Since she’s still got the footage, she still poses a threat. There’s also the issue of the missing body and other gaps that need to be filled in. Mariah won’t think her relationship can come back from this, but the ladies will ask her to put on a show. She’ll be urged to win Tessa’s trust so they can get a grip on this.

Mariah will reluctantly agree, but this is far from a foolproof plan. Considering how Mariah has forgiven Tessa in the past, it probably won’t be long until the scheme becomes real love again. Once Mariah leaves, Phyllis will sense that they need an insurance policy. Victoria (Amelia Heinle) will insist that she’s got it covered, so Tessa should be afraid – VERY afraid!

Other Young and the Restless spoilers say Arturo (Jason Canela) will reassure a worried Abby (Melissa Ordway). She’ll feel like Mia’s (Noemi Gonzalez) presence in town changes the game. Arturo, on the other hand, will insist that their relationship can stay strong. He’ll regret his past mistakes and promise that Abby’s the only one he wants.

Over with Nick (Joshua Morrow), he’ll reflect on the Jaboutiques bash and the dance he shared with Phyllis. Nick will briefly imagine Sharon was the one in his arms, but he’ll replace the image with Phyllis soon after. Y&R spoilers say Nick will also send Phyllis a text. He’ll be hoping for an answer about moving in with him.

During a chat with Jack (Peter Bergman), Phyllis will bring up Nick’s request. Jack will wonder if Phyllis is really over Billy (Jason Thompson) yet, but she’ll dodge the question artfully. Later, Jack will give Abby some advice. He’ll talk about how he should’ve fought harder for the person he wanted. As a result, Abby will decide to put the work in and keep Arturo in her life.

Unfortunately, Mia will cause more mayhem. At Rey’s (Jordi Vilasuso) place, Arturo will show up to set Mia straight. She’ll refuse to change out of her skimpy nightgown and start flirting a bit. Arturo will shut it down and maintain that he’s not interested. He’ll hope he can keep Mia in line, but she’ll make matters worse eventually.

At Dark Horse, Mia will make a move on Arturo as Abby arrives. The Young and the Restless spoilers say Abby will fight for her man as promised! She’ll get into a fierce argument with Mia and argue that she needs to back off.

It sounds like another exciting episode’s on the way. We’ll give you updates as other Y&R news comes in. Stay tuned to the CBS soap and don’t forget to check CDL often for the latest Young and the Restless spoilers, updates, and news.