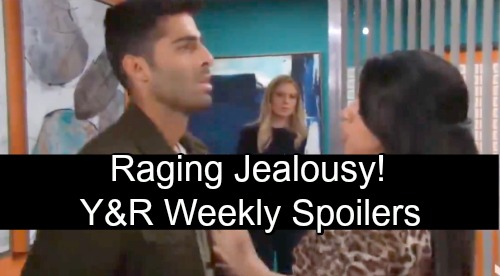 The Young and the Restless (Y&R) spoilers for the week of November 19-23 tease that we’ll see some clashing as well as some celebrations. For starters, we should talk about the secret Mariah’s (Camryn Grimes) now in the loop on. Tessa (Cait Fairbanks) finally dropped the J.T. (Thad Luckinbill) bomb, so Mariah will confront Sharon (Sharon Case) about what she knows.

Sharon will look petrified as she scrambles to explain. Mariah will be hurt that her mom lied to her for months, but the real question is how much she’ll spill herself. Sharon’s naturally going to wonder how Mariah found out. That should put Mariah in a tricky situation, but she tends to think honesty is the best policy.

Once Mariah admits Tessa’s the blackmailer, it’ll send shockwaves and cause some serious trouble. Regardless, the truth about Tessa’s actions will be revealed to the whole gang soon enough. In the meantime, Victoria (Amelia Heinle) will get caught doing something she shouldn’t. Let’s just hope Rey’s (Jordi Vilasuso) not the one doing the catching! Victoria really needs him off her back right now.

Speaking of Rey, he’ll open up to Sharon this week. Rey will talk about the betrayal he went through, which involved both Mia (Noemi Gonzalez) and Arturo (Jason Canela). While Sharon offers support, Mia will cause problems for Arturo and Abby (Melissa Ordway). She’ll make a play for her ex, so Y&R fans will see Abby’s jealousy rev up.

Other Young and the Restless spoilers say Devon’s (Bryton James) party will get out of hand. He’ll throw a major bash at his penthouse, but the real goal won’t be entertainment. Devon will just be drowning in grief, so he’ll hope to ease his pain a bit. Unfortunately, it won’t help in the end. The shindig will only earn Devon a hangover and criticism from Nate (Brooks Darnell).

Back with Mia, she’ll manage to ease the tension with Lola (Sasha Calle). They’ll make peace, even if it’s just temporary. The timing’s perfect since Thanksgiving is almost here. The Abbott clan won’t have Ashley (Eileen Davidson) at the table this year, but Jack (Peter Bergman) will decide to fill her spot. He’ll give Kerry (Alice Hunter) an invitation to the family gathering, so she’ll mull it over and accept.