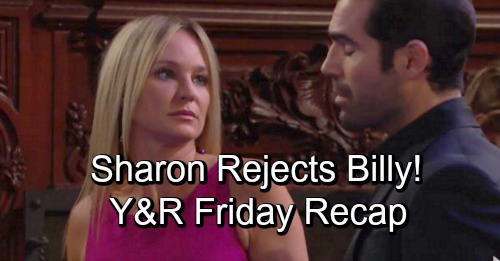 The Young and the Restless (Y&R) spoilers update and recap for Friday, November 16, tease that Summer (Hunter King) will push Kyle (Michael Mealor) for a dance. She’ll manage to convince him at the Jaboutiques launch party, but he won’t like what comes next. While they’re pulled in close, Lola (Sasha Calle) will spot them and fume over to the kitchen. She’ll think she’s dealing with the same old drama.

Meanwhile, Summer will make a speech about how much Kyle means to her. She’ll insist that she understands that now. Summer will add that she’s the more exciting option and move in for a kiss. The Young and the Restless spoilers say Kyle will break free and argue that it’s too late. He’s found everything he needs in Lola.

Unfortunately, Lola will be cold when Kyle approaches. He’ll assume she witnesses the dance and is now angry with him. Over with Phyllis (Gina Tognoni), she’ll face Billy (Jason Thompson) and Jack’s (Peter Bergman) pressure to do the right thing. Phyllis will finally relent and give Billy credit in the reporter’s interview.

Over with Abby (Melissa Ordway), she’ll be upset over the Mia (Noemi Gonzalez) and Arturo (Jason Canela) cheating revelation. Arturo will end up tracking her down at the Abbott mansion, but she’ll refuse to open the door. At Arturo’s request, Lola will give it a shot. Once Abby lets her in Lola will sit down with her and explain the situation. She’ll contend that most of the blame should be put on Mia.

Lola will admit Mia loved Arturo before she married Rey. They ended up not being able to stay away from each other later, but Arturo regrets the betrayal. Afterward, Abby will agree to hear Arturo out. He’ll promise that he’s ashamed of his actions and wants to be a better person. Arturo will insist that Mia’s part of his past, but Abby will worry about temptation.

Back at the party, Sharon (Sharon Case) will tell Rey she’s been there as far as cheating goes. She’ll offer to lend an ear anytime he needs her. Later, Rey will spar with Mia at his apartment. He’ll think she intentionally caused problems, but she’ll think Rey’s making this about Sharon. Mia will profess her love again and push for sex, but Rey will shut her down. He’ll be sleeping on the couch alone tonight.

Nick (Joshua Morrow) will spot Sharon and bring up all the Rosales family mayhem. He’ll worry about Sharon being dragged into it, but she won’t want his concern. Next, Nick will dance with Phyllis after the guests clear out. He’ll end up asking Phyllis to move in with him, so Nick’s impulsive, stupid streak will continue!

As for Kyle, he’ll let Lola know she’s the one who’s captured his heart. Y&R spoilers say they’ll patch things up and share a dance as well. At Sharon’s place, Billy will take her home and nearly plant a goodnight kiss. Sharon won’t think that’s the best idea. She’ll suggest that she doesn’t want to do anything out of revenge and that’s all this would be for her.

Billy will be grateful for Sharon’s common sense. He’ll note that she saved him from making another dumb mistake, so “Shilly” will stay friends for now. We’ll give you updates as other Young and the Restless news comes in. Stick with Y&R and don’t forget to check CDL often for the latest Young and the Restless spoilers, updates and news.