BY hellodrdavis on November 9, 2018 | Comments: one comment
Related : Soap Opera, Spoiler, Television, The Young and the Restless 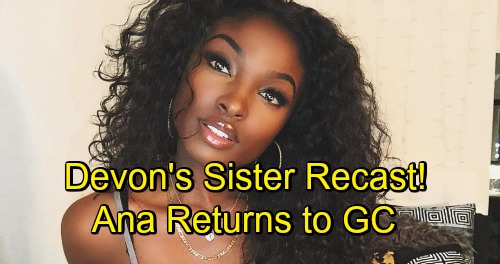 The Young and the Restless spoilers have some exciting news to report about a character who will soon be back on the CBS soap. Ana Hamilton, Devon’s (Bryton James) sister, will soon return to Genoa City.

Ana is the second child of Devon’s mother Yolanda Hamilton (Debbi Morgan). She first came to Genoa City back in 2008 along with her aunt and adoptive mother, Tyra Hamilton (Eva Marcille).

Ana hasn’t been seen on Y&R since 2012, when she was portrayed by Jamia Simone Nash. The role has now been recast, with former American Idol star and contestant Loren Lott portraying Ana. Loren Lott will make her first appearance as Ana on a new Y&R episode November 28.

Loren was a contestant during the 14th season of American Idol back in 2015, and she has appeared in various television series, including Greenleaf and Twisted Mines. She has also appeared in live theatrical productions, such as Once On This Island and Motown The Musical.

In an Instagram post to her followers, Loren shared the news about her new role as Ana. “IT’S OUT – my first series regular!” she said. “I have joined the cast of The Young and the Restless…I couldn’t believe it when I got the call from all of my team on the Fone. I’m so grateful.”

It will be interesting to watch Devon and Ana reconnect. The character of Ana has considerable musical talent, and at one point she was enrolled in a music school by Katherine Chancellor (Jeanne Cooper). Given that the role will now be played by a former American Idol contestant, we’ll likely see just how much her musical talent has progressed over the years.

Are you excited to see Loren Lott in the role of Ana? Stay tuned to the CBS soap and don’t forget to check CDL often for the latest Young and the Restless spoilers, updates, and news.

I meannn I moved to California and EVERYDAY has been lit lol tag your turn up partner. And shout out to everybody who said hi to me on Hollywood blv! I felt cool lol @jdoddwadd