BY Heather Hughes on November 17, 2018 | Comments: one comment
Related : Soap Opera, Spoiler, Television, The Young and the Restless 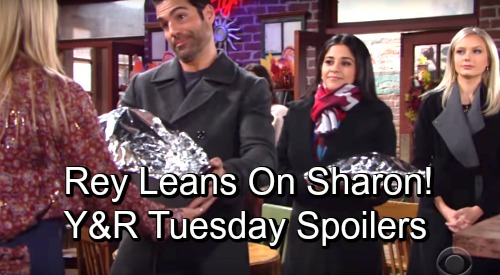 The Young and the Restless (Y&R) spoilers for Tuesday, November 20, tease that Sharon (Sharon Case) will check in with Rey (Jordi Vilasuso). He’s obviously been going through a lot since his wife came to town. Mia (Noemi Gonzalez) is eager to get back together, but this one’s trouble! She’ll be making plenty of moves on Arturo (Jason Canela) this week, so the whole recommitting thing seems iffy.

Rey doesn’t trust Mia and he’s developed some strong feelings for Sharon. All of that will be on his mind during The Young and the Restless episode, and Sharon will sense that Rey’s having a hard time, so she’ll want to help. She’ll encourage Rey to open up about the pain he endured thanks to Mia’s cheating. It’s something Sharon can relate to, especially since her own betrayal wounds are still fresh.

Rey’s brother was the one Mia cheated with, so that’s an added blow. It’s been a source of constant tension in the Rosales family. Sharon experienced similar sorrow since Nick (Joshua Morrow) turned to Phyllis (Gina Tognoni). That sting was unpleasant blast from the past. Nick basically slept with the one person that would hurt Sharon most.

Sharon and Rey may do some commiserating in Tuesday’s new Y&R episode, November 20. However, Sharon will undoubtedly keep the focus on Rey. She’s worked through a lot of her own agony, but Rey’s head is still spinning from Mia’s problematic arrival. It certainly derailed Rey and Sharon’s plans for romance, but they should get back on track sooner or later.

Other Young and the Restless spoilers say Victoria (Amelia Heinle) will get caught red-handed. On Monday, Victoria learns Tessa (Cait Fairbanks) is the blackmailer and vows to take care of the problem. Will she put her plot in action on Tuesday? Will Tessa spot her or could someone else spy something suspicious? Regardless, Victoria will find herself in a sticky situation.

Meanwhile, Mariah (Camryn Grimes) will have another scheme in motion. This one is most definitely destined to fail. Thanks to the cover-up crew’s pressure, Mariah will pretend to forgive Tessa and try to reestablish trust between them. She’ll be hoping to get rid of any lingering evidence, but this is a terrible idea.

Mariah’s hurt over Tessa’s lies, but it’s not like she automatically shut her feelings off. Love doesn’t work like that. Sharon (Sharon Case) and the others are crazy for even asking Mariah to attempt the ruse. In fact, it probably won’t be a ruse at all for very long. It’s just a matter of time until Mariah truly forgives and things get complicated.