The Young and the Restless Spoilers: Nikki Rushed to Hospital – Deadly J.T. Chaos Has Disastrous Consequences 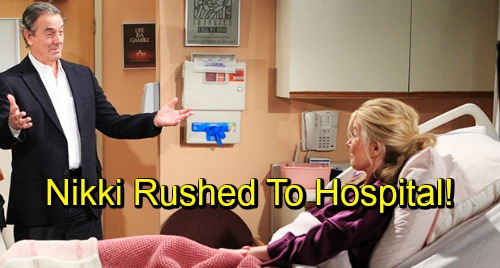 The Young and the Restless (Y&R) spoilers tease that some deadly mayhem is about to erupt. Rey’s (Jordi Vilasuso) highly suspicious of Victoria (Amelia Heinle) and the rest of the girls’ night gang. He recently tripped Victoria up a bit during an interrogation, so he can tell he’s on the right track.

Of course, Rey’s also been trying to learn more about the cover-up crew’s “charity work.” Nikki (Melody Thomas Scott), Sharon (Sharon Case), Phyllis (Gina Tognoni) and Sharon should’ve known better than to meet constantly. Most of them don’t even like each other, so this was a huge red flag.

To make matters worse, the gang conducted their meetings in a public place! They’ll inevitably regret making Crimson Lights their headquarters. Nosy Tessa (Cait Fairbanks) blackmailed Nikki and is pulling Mariah into the drama. That could create added pressure for Sharon, who’s already been on the verge of cracking several times.

Despite Tessa’s desire to keep this quiet and focus on building a life with Mariah, the truth about her actions will ultimately come out. After Victoria takes a page out of Victor’s (Eric Braeden) playbook to handle it, there could be another layer of risk. It’s not a good idea for the cover-up crew to be doing anything too bold right now.

All of this will build to some major Y&R shockers over the next couple months. However, there’s one bombshell that many fans may not see coming! The Young and the Restless spoilers say Nikki will land in grave danger. Thanks to a cast member’s Instagram story and a glimpse of the monitor in the background, we know Nikki will end up in the hospital.

What could leave Nikki in bad shape? It’s worth noting that Nikki won’t have visible injuries on her face. She seemingly won’t be banged up, so this could be some health issue instead of an assault or accident. No one would blame Nikki if she had a heart attack after learning murder charges might be imminent. A panic attack might be another option to consider.

Whatever the case, Nikki should find herself in a hospital bed as Christmas approaches. It sounds like it won’t be a happy holiday for Nikki this year. We’ll give you updates as other Young and the Restless news comes in. Stay tuned to Y&R and don’t forget to check CDL often for the latest Young and the Restless spoilers, updates and news.