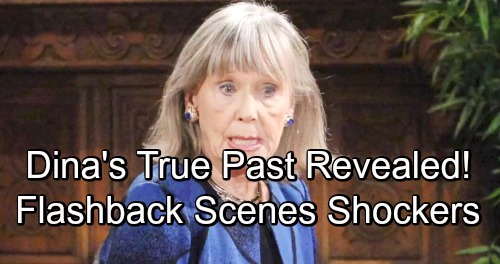 The Young and the Restless (Y&R) spoilers reveal that we’ve got some comings and goings news to share. The week of October 22-26 will bring some interesting flashbacks for fans. Y&R will dive deep and explore some Abbott family history. We’re headed back to the 1970s, so that’ll bring some returns and debuts.

In some flashback scenes last year, Jonathan Stoddard portrayed a younger version of John Abbott. He’ll reprise the role this week along with his TV wife. Cathy Marks will once again portray a young Dina, so we’ll learn a little more about her actions in the past.

Soap Opera Digest had a chat with the actors, who are clearly excited about the material that’s about to air. Stoddard admitted he was surprised to be called in again, but he was definitely up for the challenge. The last time Stoddard shot his Young and the Restless scenes, he was an under-five player. His latest stint involved more work since there were far more lines to learn.

“This year, going into it, I thought, ‘Okay, I need to stay within the lines of what I did last year and stay true to the work,’” Stoddard said. He was both excited and terrified about playing the iconic role of John Abbott, which was later portrayed by Jerry Douglas.

Marks didn’t take her work as Dina (Marla Adams) lightly either. She put in plenty of research to make sure she had a good grip on the character. Marks also offered some hints about how her upcoming scenes connect to Dina’s story. “These flashbacks really humanize her and we can see that she’s not a completely terrible person,” Marks said.

It turns out Dina had some needs that weren’t met back then. She abandoned her family, but that wasn’t the plan. Marks insisted that it was “never her intention to leave her kids and break all of their hearts.” The Young and the Restless spoilers say we’ll get a closer look at Dina’s reasons over the next few episodes.

Of course, we can’t forget about John and Dina’s brood. Jack’s (Peter Bergman) younger self will once again be portrayed by Graham Taylor. Ashley’s (Eileen Davidson) youth will come to life in the form of Julia D’Arcy Badinger. As for Traci’s (Beth Maitland) mini me, Valentina Sky Gordon will step up.

Traci will be instrumental in how these family reflections come about. Let’s hope remembering the past helps mend the present and provide hope for the future. We’ll give you updates as other Y&R details emerge. Stick with the CBS soap and don’t forget to check CDL often for the latest Young and the Restless spoilers, updates and news.