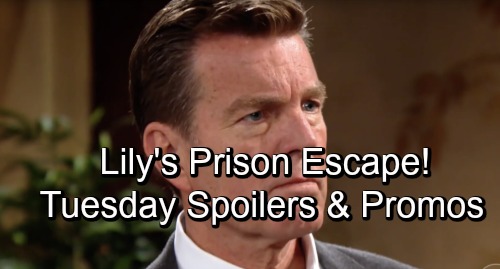 The Young and the Restless (Y&R) spoilers for Tuesday, October 23, tease that Lily (Christel Khalil) will get lost in her own little world. She’s been struggling behind bars, so a pleasant fantasy will be a welcome relief. Lily will have a chance to go out and explore – even though it’ll only be in her mind’s eye.

Of course, it’ll be a nice change of pace for fans as well. Lily’s been stuck in prison garb for a while now and we only get to see her in that little visiting room. Thanks to this fantasy, Lily will be able to get all dolled up and go out for a night on the town.

Cane (Daniel Goddard) will most likely wine and dine his wife in these scenes. Y&R fans should see plenty of lovely moments for “Lane.” That’s great news, but bad news will follow. Lily will get a taste of the life she’s missing, so that’ll make it even tougher when she comes crashing back to reality.

The Young and the Restless spoilers say Lily may plot a real getaway on new Y&R episodes later this week, October 22-26. Perhaps this fantasy will give her the desperate idea! Until then, Jack (Peter Bergman) will get updates on Kyle’s (Michael Mealor) discovery. He’ll find out John (Jerry Douglas) signed a document that could change Jabot forever.

As a present for Ashley (Eileen Davidson), John and Dina (Marla Adams) set all this in motion. Years ago, they made sure Ashley would have sole rights to the company’s patents and developments. Ash is essentially in control of all the lines that make Jabot profitable.

When Jack examines the contract, he’ll realize paying Ashley what she’s owed would be disastrous. Jack will warn that the company would go bankrupt. He’ll decide he can’t have that, so he’ll finish what Kyle started and shred the paper. Jack will hope to sweep all this under the rug, but Dina will wreck things by sharing her story with Traci (Beth Maitland).

Once Traci’s in the loop, she’ll tape the contract back together and fight for what Ashley deserves. The Young and the Restless spoilers say Traci will also shed some light on the past. Y&R has some fake flashbacks coming up at some point. They’ll give us a glimpse of the Abbott clan in the 1970s, so that should be fun for viewers.

This crisis should cause more conflict initially, but maybe it’ll be what brings the family together in the end. We’ll keep you posted as other Y&R details emerge. Stay tuned to the CBS soap and don’t forget to check CDL often for the latest Young and the Restless spoilers, updates, and news.