BY Heather Hughes on May 13, 2018 | Comments: one comment
Related : Soap Opera, Spoiler, Television, The Young and the Restless 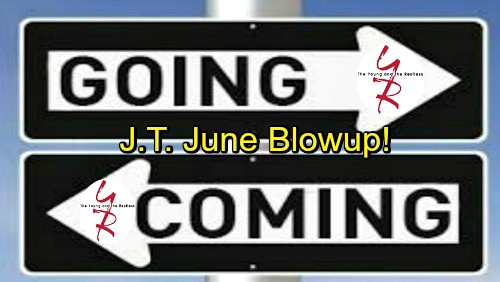 The Young and the Restless (Y&R) spoilers tease that there’s some comings and goings news to pass along. First, let’s talk about Victoria (Amelia Heinle) and Phyllis (Gina Tognoni). They’ll return from their brief conference this week, so they’ll immediately be thrown back into major drama.

Phyllis will team up with Nick (Joshua Morrow) after J.T.’s (Thad Luckinbell) cell signal comes back on. She’ll be stunned when she sees a guy who looks like J.T. with the phone. Nick will chase the guy down, but it looks like it’ll be a false alarm. J.T. will probably remain deceased, but Victoria will still face questions from Paul (Doug Davidson). She’ll tell more lies that might trip her up eventually.

The Young and the Restless spoilers say some courtroom scenes are ahead. Nikki (Melody Thomas Scott) will try to keep the rest of the cover-up gang out of trouble, but that may be impossible. There’s a good chance Sharon (Sharon Case), Victoria and Phyllis will deal with consequences, too. Regardless, an extra lawyer will be needed and that’s where Brittany (Lauren Woodland) will come in.

Michael (Christian LeBlanc) may split defense duties with Brittany during the upcoming legal battles. Y&R fans can expect so see Brittany in June for a high-profile case, so everything adds up. The Newmans have a well-known name thanks to Newman Enterprises and all their past shenanigans. Victor (Eric Braeden) has faced some legal mayhem of his own, but it’ll be Nikki and Victoria’s turn to take heat.

The Young and the Restless spoilers say Kelly Kruger (Mac) has new scenes set to air in June. Mac may give Victoria an earful for lying to her. However, she might have mixed feelings once she hears the whole ugly story. Both Mac and Victoria have fond memories of J.T., but he became a different man in the end. Mac may realize that eventually and give Victoria some support.

That’s the scoop on comings and goings! We’ll give you updates as other Y&R details emerge. Stay tuned to the CBS soap and don’t forget to check CDL often for the latest Young and the Restless spoilers, updates, and news.