BY Heather Hughes on May 11, 2018 | Comments: one comment
Related : Soap Opera, Spoiler, Television, The Young and the Restless 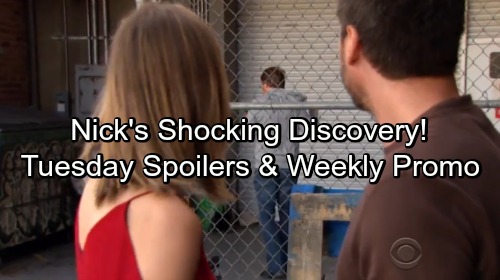 The Young and the Restless (Y&R) spoilers for Tuesday, May 15, tease that Jack (Peter Bergman) will wallow in despair. After looking at the DNA results in Monday’s episode, Jack will know he’s not a blood Abbott. Jack will have a major crisis as he deals with this devastating news. He’ll shut his family out as he struggles to cope.

In fact, Jack will bail on his duties at Jabot and hide away on Tuesday. Billy (Jason Thompson) and the rest of the Abbott clan will soon realize Jack’s missing. It seems Jack won’t be able to face Jabot right away. He can no longer be in charge thanks to that blood-Abbott clause, so he probably just won’t see the point of going in.

Fortunately, Billy will take the lead. He may hope they can sort out the clause situation and ease Jack’s suffering, but that’ll have to come later. Since Jack will be MIA, Billy will have no choice but to step up. He’ll serve as Jabot’s CEO for now, but he’ll remain quite concerned about Jack’s well-being.

Abby (Melissa Ordway) will certainly worry about Jack, too. The Young and the Restless spoilers say Arturo (Jason Canela) will come to Abby’s rescue on Tuesday, so maybe he’ll provide some comfort. Abby and Arturo have already been growing closer, but their latest bonding session could really push this romance forward. It’s clear that Y&R has something in store for these two.

Other Young and the Restless spoilers say Nick (Joshua Morrow) will make a stunning discovery. He’ll be on a mission to figure out where J.T.’s cell signal is coming from, so Phyllis (Gina Tognoni) will try to stay by his side. She’ll hope to be there when Nick cracks the case and she will be!

Once they close in on the signal near Victoria’s place, they’re in for a big surprise. J.T.’s cell phone is in the hands of one Genoa City resident, but which one? Could it be a guilt-ridden Nikki or perhaps some vagrant who went dumpster diving? Regardless, Nick will be bummed that J.T. wasn’t at the end of this phone hunt. Nevertheless, he’ll vow to keep searching and focus on the cell as a lead.