BY Heather Hughes on January 24, 2018 | Comments: one comment
Related : Soap Opera, Spoiler, Television, The Young and the Restless 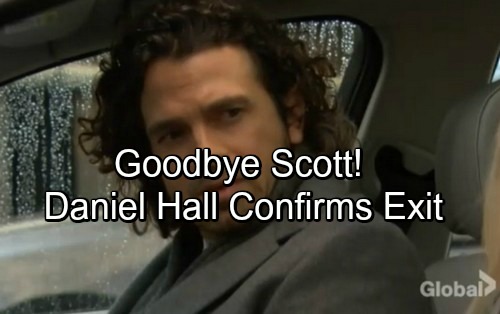 The Young and the Restless (Y&R) spoilers reveal that Scott (Daniel Hall) won’t be back on the CBS soap anytime soon. When Scott visited Abby (Melissa Ordway) in Paris, she helped him work out a deal to buy Hashtag. Abby pushed Scott to relocate and he agreed. Now that Scott’s going to be working in Paris and London, Genoa City will just have to get by without him.

Next week, Lauren (Tracey E. Bregman) will be taken aback by some big news. Scott may finally fill his mom in on the latest developments. Lauren was thrilled to have her son back in town, but at least she can relax now. It felt like she was constantly hovering and butting in Scott’s business. Maybe Lauren can devote more of her time to her career and her relationship with Michael (Christian LeBlanc).

At first, Y&R fans were left wondering if this was indeed Scott’s exit. The show still hasn’t confirmed anything, so Daniel Hall himself cleared things up on Twitter. Hall certainly seems like a nice guy. He takes time to reply to many of the Young and the Restless watchers who tweet him.

One fan asked when Hall would be back, but he hinted that the show doesn’t have a return planned yet. “It’s gonna be a while I believe,” Hall said. In another tweet, Hall noted that he was no longer on set. He’s obviously disappointed that Y&R doesn’t want him right now, but he’s holding out hope for the future. Hall promised to keep everyone posted if the show cooks up more Scott scenes. 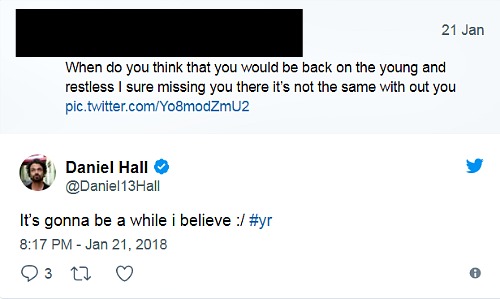 Of course, The Young and the Restless spoilers say Abby (Melissa Ordway) will be off canvas for a while as well. Ordway is on maternity leave, but she’s expected to return down the road. It’s possible that Scott and Abby’s romance will be revisited at some point.

After all, Abby will need a love interest eventually. Scott and Sharon’s (Sharon Case) ship appears to have sailed, but perhaps there’s still a chance for Scott and Abby. The show could revisit their attraction to each other later. If not, maybe a new man will walk into Abby’s life.