BY Marcy Cohen on July 18, 2018 | Comments: one comment
Related : Soap Opera, Spoiler, Television, The Young and the Restless 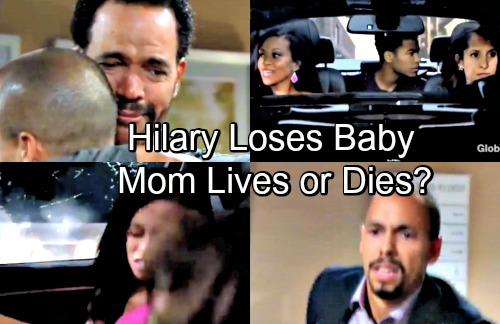 The Young and the Restless (Y&R) spoilers tease that Devon (Bryton James) will get some crushing news. Once he returns home from his trip, Devon will rush to the hospital. Due to a horrific car accident, he’ll have to deal with some major blows.

The first shocker will be that Hilary lost the baby. That certainly isn’t the outcome Devon was hoping for, but it’s something he can accept. Letting go of this little one will be heartbreaking, but Devon will have other chances at fatherhood. However, there’s only one love of his life. Devon will be most worried about Hilary during these difficult moments.

The Young and the Restless spoilers say Hilary will be in critical condition. Devon will be a mess over this whole situation, but he’ll try to stay strong for Hilary’s sake. He’ll urge her to keep fighting and build a life with him.

Unfortunately, the look on Nate’s (Brooks Darnell) face will tell Devon this is serious. He’ll realize he could lose Hilary, so he’ll make some fast decisions and bold moves. Devon might arrange for a quickie wedding in the hospital room, but that’ll depend on if Hilary’s conscious. If she isn’t, Devon’s plan may involve something medical-related.

As a billionaire, Devon can secure the finest doctors in the world for Hilary. There’s surely a treatment center somewhere that’s got some miracle trial. Sending a comatose Hilary out of town might be a way of keeping the door open for a recast.

However, Mishael Morgan tweeted about her last day at Y&R on June 28. It’s possible she actually filmed her last scenes before that and held the tweet back. If not, this might be cutting it a bit close on Hilary’s departure. The Young and the Restless may not be done with Hilary’s exit story just yet.

Of course, there’s also that strange situation with Mark to consider. Y&R can’t just leave us dangling! It seemed like the show was setting up a potential job opportunity for Hilary elsewhere. Why do that if they were just going to kill her off or send her away for treatment?