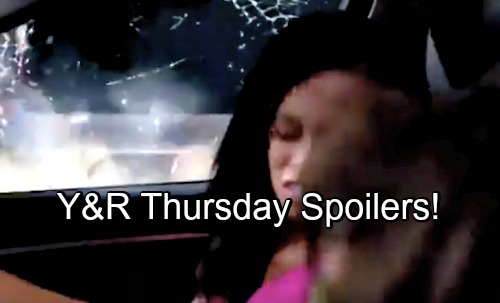 The Young and the Restless (Y&R) spoilers for Thursday, July 19, tease that Abby (Melissa Ordway) will be in a tight spot. Y&R fans know she’s definitely craving some power. Unfortunately, Victor (Eric Braeden) continually stabs his daughter in the back. He doesn’t think Abby has what it takes to be successful in the corporate world.

However, straying from the typical Newman path could spell trouble. Abby endures unfair treatment most of the time, but at least Victor isn’t scheming against her. If Abby turns to the dark side, there may be no turning back. Nick is at war with Victor, so joining her brother’s team could lead to catastrophe.

Victor may be down, but he’s not out. Once he recovers from Nick’s devastating blows, he may come roaring back and crush his son’s company. Nick’s the proud owner of Dark Horse, which is an incredibly fitting name under the circumstances. Victor’s got a great track record when it comes to vicious comebacks, so Nick may indeed be the dark horse of this fight.

As for Abby, she’ll have to pick a side. Will she stick with the status quo and accept that there’s no room for growth? Will Abby risk alienating Victor and support Nick’s venture instead? She’ll feel pressured to make a decision soon, so Y&R viewers will be anxious to see where she stands.

Other Young and the Restless spoilers say Sharon’s (Sharon Case) fears will grow. She’s seeing ruthlessness rise inside Nick and that’s pretty disturbing. Nick could be setting himself for a huge fall if he gets too cocky. The moment a soap character feels invincible is exactly when disaster strikes.

Speaking of disasters, Thursday’s episode may bring updates on Wednesday’s car crash. Hilary (Mishael Morgan), Lily (Christel Khalil) and Charlie (Noah Alexander Gerry) aren’t listed in The Young and the Restless spoilers, but that’s probably because the show wants to hide the details. Lily won’t have a scratch in the waiting area on new Y&R episodes later this week, July 16-20, but Hilary will inevitably suffer a tragic miscarriage.

In the meantime, Jack (Peter Bergman) will make a power play and hope it works out. He isn’t a Chancellor, but that doesn’t mean he can’t stir up some Chancellor Industries drama. If there’s a way, Jack will find it! Cane (Daniel Goddard) will have to guard the Chancellor legacy soon enough, so there could be a connection here.

It sounds like some exciting scenes are ahead in Genoa City. We’ll keep you posted as other Y&R news comes in. Stay tuned to the CBS soap and don’t forget to check CDL often for the latest Young and the Restless spoilers, updates, and news.