The Young and the Restless Spoilers: Dina Had Another Son Through Phillip – Jack Has New Brother? 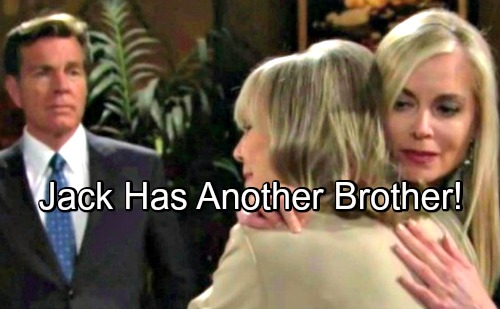 The Young and the Restless spoilers tease that Jack Abbott (Peter Bergman) may learn that he has another brother. Yes, Jack’s biological father was, is, and will always be John (Jerry Douglas), thereby keeping his last name Abbott. But the new male sibling is someone Dina (played by the exceptional Marla Adams) gave birth to through a man other than John.

Okay, let’s address Billy (Jason Thompson) first because some viewers may not know that his DNA sample didn’t confirm a half-sibling match. Jack currently thinks that means he (Jack) isn’t John’s genetic child, when actually the other option is true. Jill (Jess Walton) philandered her way to riches decades ago, including the time she cheated on John with a character to be named and then had Billy.

So, Jack has had a brother for many decades, it’s just not Billy. Instead, his brother came from the tryst Dina (Marla Adams) had with Phillip years before he had Phillip III (Thom Bierdz) through Jill.

With the above refresher, or fill-in’s for newer viewers now presented, it’s time to get to the heart of this digital feature. How does Jack have another brother?

Dina has revealed herself as etching a boorish path long before Jill started throwing herself at numerous men. Dina told Abby and has now told others that John just couldn’t give her what she needed. While she didn’t say it and others might claim judging (which is a catch phrase for libertines who irrationally believe no consequences come from any actions), Dina was undersexed, a sexoholic, a sex addict, or however one wants to write it, say it, or whatever.

The woman needed psychological and religious counseling, not rendezvous with her non-husband on the outskirts of GC. Those who are rational and strive for morality will agree. Others, who see themselves as evolved, will disagree and shriek, “You go girl!”, like any teenager, or teenager wannabee.

Dina was not a girl when she was married to John. She broke her vows to him repeatedly because she was lying to the man she’d claimed to have committed to. While doing so she was full disregarding her three young children, who were also the unwitting victims of her moral crimes. That wasn’t, isn’t, and will never be something to adore, or emulate.

However, Dina did return to GC to make amends and remains fully sincere in that regard. She pressing for ongoing redemption. So, people who lectured her, including this scribe, must offer full, deserved, kudos and honest support.

Silence about one’s mistakes prevents those who are making similar ones to not be exposed to why the actions of others were wrong, and therefore can be avoided now and in the future. That’s the full, fatal flaw that exists in the regressive attitudes of everyone, everywhere who preach that no morality is okay. It’s not.

Just look at what Jack’s going through for proof of the above reality (not theory). Better yet, ask whoever his brother is when that person is created.

And if this conjecture about Jack proves false, nothing, zero, nada offered about Dina will have been wrong. Not what she did, or what she’s doing now. CDL is a leading source for everything linked to The Young and the Restless. Check back regularly for Y&R spoilers and news!