BY Heather Hughes on May 31, 2018 | Comments: 3 comments
Related : Soap Opera, Spoiler, Television, The Young and the Restless 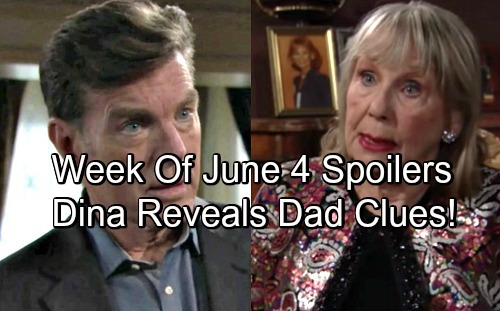 The Young and the Restless (Y&R) spoilers tease that Jack (Peter Bergman) will reach out to Dina (Marla Adams) again. He’s left the Abbott home, but he can’t just abandon his mother right now. Jack doesn’t know how much time Dina has left.

The family’s dealing with the painful mental decline of Alzheimer’s, so Jack needs to keep in touch with Dina and let her know he cares. He’ll need those memories to cling to when Dina’s no longer around. Of course, there’s actually another good reason for Jack to keep Dina in his orbit. She’s the only person who can offer answers about the past.

Jack was torn apart when a second DNA test confirmed he wasn’t John’s (Jerry Douglas) son. However, he seems to have reached a place of acceptance. This obviously is still an upsetting time in Jack’s life, but he can’t let it hold him back. The Young and the Restless spoilers say Jack will spend this summer focusing on his history and what it means for his future.

Y&R fans know Jack isn’t too happy about Dina’s behavior in younger days. This gal really got around! That could make it tougher to pin down the exact details of Jack’s conception, but he could be on the right track soon.

The Young and the Restless spoilers say Dina will reveal some startling new clues on next week’s new Y&R episodes, June 4-8. Jack will listen as Dina describes her old lovers and their hot encounters. He’ll push Dina to remember the name of some of her gentleman callers, but her memory will remain blocked on that.

Nevertheless, Jack should get some intriguing hints out of this. He’ll mull over the mystery and try to figure out what he can do with this new info. Perhaps Jack can find some sort of paper trail based on Dina’s latest revelations. She may not have a name, but some locations could be helpful. Maybe The Stardust Inn wasn’t the only usual hookup spot for Dina and Jack’s dad.

Jack might even uncover some old mementos that could point him in the right direction. If Jack ultimately finds his father, it’ll open up a whole new world for him. He could have plenty of new relatives to meet. It’d be interesting if The Young and the Restless introduced some other siblings Jack doesn’t know about yet.

For now, Jack will keep Dina close and try to learn what he can while she’s lucid. Dina’s the key to cracking this case! We’ll give you updates as other Y&R news comes in. Stay tuned to the CBS soap and don’t forget to check CDL often for the latest Young and the Restless spoilers, updates, and news.