BY Heather Hughes on May 15, 2018 | Comments: 2 comments
Related : Soap Opera, Spoiler, Television, The Young and the Restless 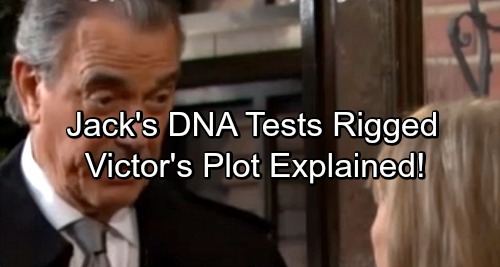 The Young and the Restless (Y&R) spoilers tease that Jack (Peter Bergman) has most likely been deceived. Ever since this whole “Jack isn’t a blood Abbott” story kicked off, Y&R fans have been outraged. Longtime viewers are particularly furious about the destruction of the Abbott clan.

Ashley (Eileen Davidson) found out she wasn’t a true Abbott long ago, so that’s always been an interesting layer of drama. It was simply exposed to more people recently, which added to the excitement. However, the Jack situation seemingly came out of nowhere. It’s far-fetched and doesn’t make any sense.

Why does Dina always mistake Jack for John (Jerry Douglas)? Shouldn’t that be a strong hint that Jack looks and acts just like his pop? Also, why did Dina suddenly decide to reveal Jack’s paternity? Dina’s been battling Alzheimer’s for a while now, so you’d think she would’ve blabbed to someone before that interview. This should’ve come up right after Ashley’s public paternity revelation.

Things just aren’t adding up and there should be a good reason why. Y&R is undoubtedly laying the groundwork for some major twists. In a recent Soap Opera Digest interview, head writer and executive producer Mal Young hinted that viewers should chill. He wants The Young and the Restless fans to enjoy the ride before they blow their tops.

Naturally, that suggests Jack will be a blood Abbott after all. If so, how will Y&R explain the two DNA tests that said otherwise? It’s possible one of the tests was a mistake and the other actually proves another family member isn’t an Abbott. Traci (Beth Maitland) or Billy (Jason Thompson) could face a paternity change, but that wouldn’t really ease the fan backlash. Viewers want this family kept intact.

With that in mind, we should consider other options. What if this is all Victor’s (Eric Braeden) elaborate scheme? Y&R watchers will recall that Victor took Dina to her “formal dance.” She was transported through time as she waltzed around with Victor, but who knows what he was whispering in her ear? Dina’s interview happened soon after that night, so maybe Victor planted the idea in her head.

Victor pushed Kyle (Michael Mealor) to leave Dina alone, but that might’ve been an act to dupe his ally. He surely knew Kyle would keep digging anyway. Victor may have been counting on Kyle to score evidence despite the warning. As for the DNA tests, Victor must have lab techs on the payroll. Maybe he advised them to change any results that involved Jack Abbott.

Victor might’ve secretly known about the blood-Abbott clause long before Kyle mentioned it. If not, it could’ve been a pleasant surprise that fit with his plan. Taking away Jack’s Abbott title would’ve been a crushing blow anyway, but the fact that he’s losing the Jabot CEO spot is even better for Victor.