The Young and the Restless Spoilers: Mal Young Reveals Paternity Story Twists – Hints That Jack’s a Blood Abbott After All

BY Heather Hughes on May 8, 2018 | Comments: 7 comments
Related : Soap Opera, Spoiler, Television, The Young and the Restless 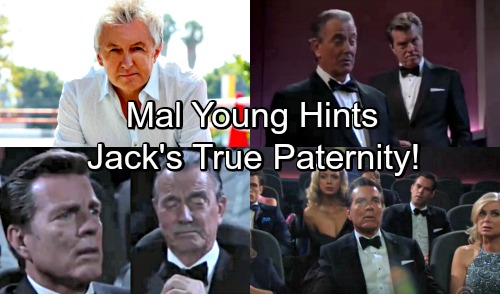 Revealing Jack has a different father after all these years just seems silly, especially since they’ve already got that angle covered. Ashley’s (Eileen Davidson) paternity drama was set up years ago and created a gripping story for the family. One non-blood Abbott is fine, but there’s no need to go destroying Jack and Kyle’s (Michael Mealor) blood ties as well. There’s just no point.

Fortunately, this storyline isn’t over yet. Mal Young, Y&R’s head writer and executive producer, recently dished on what’s to come in a Soap Opera Digest interview. His hints about the future were quite encouraging.

Young teased, “There are a lot of fans who might jump right away and see the beginnings of a story and say, ‘Oh, that’s terrible, this is where they’re going!’ and I would just say, ‘Well, you don’t know where we’re ultimately going.” He added that he’s always planning out storylines for the whole year in his head. As for what’s on paper, Young has about six to eight months mapped out.

“This story is far, far from over,” Young said. “There’s a lot more twists and turns to come I can assure everyone, so I wouldn’t say, ‘Make your decisions now based on what we’re seeing’…” Young obviously isn’t allowed to reveal this storyline’s ending, but he came pretty darn close in our opinion. He seems to be letting us know Jack’s paternity shocker won’t stick.

Young’s telling outraged fans not to be mad until they see the rest of the story. That tells us they won’t have a reason for anger down the road. As CDL exclusively previously predicted, The Young and the Restless spoilers suggest Jack is most likely a blood Abbott after all.

It’s possible that fans still won’t be thrilled about what’s ahead. Since Traci’s (Beth Maitland) DNA was tested against Jack’s, the show could make her the one who’s not a true Abbott. That would probably lead to a little less backlash, but not much. People want the rest of the Abbotts to stay Abbotts!

Luckily, there are other ways of fixing this mess. On soaps, DNA test results are altered all the time. Lab errors are always a possibility, too. Let’s hope John’s (Jerry Douglas) children will remain his children in the end. Of course this experience could make Jack realize what he put Ashley through and cause him to realize that blood isn’t everything and character counts for more.

Are you relieved by Mal Young’s clues about the future? Do you think everything will work out for Jack later? We’ll give you updates as other Y&R news comes in. Keep watching the CBS soap and don’t forget to check CDL often for the latest Young and the Restless spoilers, updates, and news.