BY Heather Hughes on May 7, 2018 | Comments: one comment
Related : Soap Opera, Spoiler, Television, The Young and the Restless 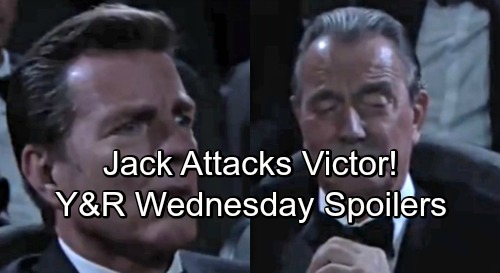 The Young and the Restless (Y&R) spoilers for Wednesday, May 9, tease that Jack (Peter Bergman) will really lose it! Tuesday’s episode brings the paternity bombshell, so Y&R fans should prepare for the shocking fallout. Dina’s (Marla Adams) screening will bring even more drama for the Abbotts and everyone else at this gathering.

On Wednesday, Jack will struggle to control his emotions. He’ll lash out as his family members try to calm him down. “The Young and the Restless” spoilers say there’ll be a lot of finger-pointing going on. Jack may think the party-crasher had something to do with this. He may accuse Victor (Eric Braeden) of making sure Dina’s paternity comments were shown.

Of course, Jack will likely suggest this is a lie Victor cooked up to hurt him. He won’t want to believe he’s not John’s (Jerry Douglas) son. However, Ashley (Eileen Davidson) and Abby’s (Melissa Ordway) awkward behavior could stir up suspicions. When pressed, they may admit that a DNA test confirmed Dina’s claims.

Kyle will attempt to comfort his dad, but he’ll undoubtedly face accusations as well. Even if Jack doesn’t suspect Kyle, Ashley certainly will. She doesn’t trust him after the stunt he pulled with Victor. Ash may believe this is another scheme, so Kyle had better be prepared for backlash.

The Young and the Restless spoilers state that Charlie (Noah Alexander Gerry) will also be under fire. Cane (Daniel Goddard) will defend his son’s innocence in this mess. He may argue that everything was fine for Jack’s sneak peek, so there’s no reason to think Charlie changed the final product. This certainly seems like a sneaky setup instead.

Thanks to the wild screening aftermath, Poor Dina will end the night with a major meltdown. The Young and the Restless spoilers say her health setback will be brutal, so Jack may have to rethink how he’s handling all this. It’d be better to stay calm and give Dina the peace she needs.

Nevertheless, Y&R viewers will see plenty more drama as Jack works through his sorrow. He’ll have to do some soul-searching as he copes with total devastation. We’ll give you updates as other news comes in. Stick with the CBS soap and don’t forget to check CDL often for the latest Young and the Restless spoilers, updates, and news.