The Young and the Restless Spoilers for Next 2 Weeks: Paul Backs Victoria Into a Corner – Proof Incriminating Kyle Discovered

BY Heather Hughes on May 7, 2018 | Comments: 3 comments
Related : Soap Opera, Spoiler, Television, The Young and the Restless 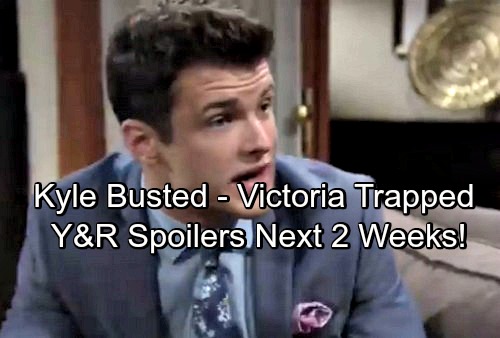 The Young and the Restless (Y&R) spoilers for the next two weeks tease that chaos is looming in Genoa City. The week of May 7-11 will deliver plenty of suffering for Jack (Peter Bergman). Despite an earlier preview that was perfectly fine, Dina’s (Marla Adams) interview screening will include the paternity bomb. Jack will really lose it as he processes the news that he’s not John’s (Jerry Douglas) son.

After the blow is dealt, Dina will have a terrible episode. Her condition will rapidly deteriorate, so that’ll be another crisis for the Abbotts to face. Ashley (Eileen Davidson) and Abby (Melissa Ordway) may explain the DNA test to Jack, which should make all of this quite real for him. He’ll try to accept Dina’s admission as fact.

Of course, the blood-Abbott clause will have to be addressed soon. Jack will likely have a shocking realization about Kyle. He should know why his son wanted to get that clause tossed out. Jack may wish he’d listened soon enough!

Will Jack appreciate Kyle’s efforts to save him more pain? It’s possible, but we can’t forget that Kyle gave Victor (Eric Braeden) the evidence. That’ll undoubtedly come back to bite him. The Young and the Restless spoilers say Ashley will uncover proof that incriminates Kyle. She might suspect that Kyle’s to blame for the whole interview fiasco.

Over with Sharon (Sharon Case), she’ll distract Nick (Joshua Morrow) from his J.T. (Thad Luckinbell) search with sex. They’ll grow closer, but Sharon’s secrets should spell trouble. The week of May 14-18 will bring even more Y&R shockers. Despite Sharon’s best efforts, Nick will rev up his hunt for the angry abuser. If he finds the body, the cover-up crew will have a real mess on their hands.

When Victoria (Amelia Heinle) returns from her trip with Phyllis (Gina Tognoni), she’ll be backed into a corner. Paul (Doug Davidson) will demand answers about some new details, so Victoria will certainly be under serious pressure. The Young and the Restless spoilers say some tense moments are brewing.

Back with Sharon and Nick, they’ll make a crucial choice. Perhaps they’ll decide to give their reunion a shot or maybe they’ll hold off until the J.T. mayhem dies down. Either way, Sharon’s lies will continue. Finally, Neil (Kristoff St. John) will be there for a pal. It looks like he’ll support Jack, who’ll remain devastated about the paternity situation.

The next two weeks will feature some can’t-miss episodes, so stay tuned. We’ll give you updates as other Y&R details emerge. Stick with the CBS soap and don’t forget to check CDL often for the latest Young and the Restless spoilers, updates, and news.