BY Sean O'Brien on May 6, 2018 | Comments: one comment
Related : Soap Opera, Spoiler, Television, The Young and the Restless 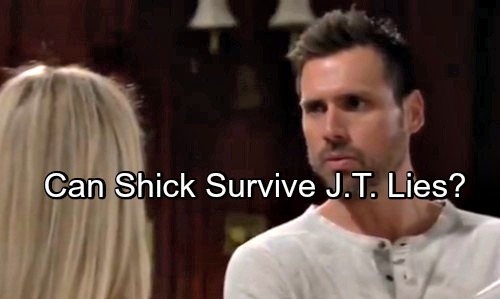 The Young and the Restless spoilers tease that Sharon’s (Sharon Case) reversal on the J.T. (Thad Luckinbill) coverup plan will impact Shick’s apparent reunion once the climax to this crime story is told. Nick (Joshua Morrow) has a history of trust issues affecting various relationships, including past ones with Sharon in particular. On this Monday’s new Y&R episode, May 7, Sharon will take Nick to bed to distract him from pursuing his J.T. questions – but will this hurt or help Shick’s long-term prospects?

It seemed as though Case’s character was losing it. She couldn’t bear the burden of having seen a be-fixed Mr. Hellstrom unexpectedly and accidentally bludgeoned to death by Nikki (Melody Thomas Scott). Bludgeoned may be too purposeful, as this one-hit wonder merely plunked her soon-to-be son-in-law on the back of the head to get him off Victoria (Amelia Heinle).

As Sharon stated to Nikki, Vickie, and Phyllis (Gina Tognoni) this week, the traumatic effect of what happened affected each of them in different ways. All four ladies have reacted based upon their own experiences in life, or with past crimes committed. Here’s looking directly at you Nikki and Phyllis because Vickie was the victim and Sharon initially resisted the purposely lies that were told.

It seemed like Sharon was going to soon tell Paul (Doug Davidson) what happened. She’s been pushing to tell the police the truth. Nikki never intended to kill J.T., circumstances quickly developed, and Mama Bear hit him over the head. But Phyllis nixed that option by opening her big mouth (yes, that’s an apt description to all who falsely claim offense) and basically intimidated Sharon into shutting up.

Days passed. Sharon was guilt-ridden and scared. Whenever the phone yelled, or there was a rap at the door Sharon believed the cops were coming to haul her away. She kept pressing the conspirators to do what was right. Tell Paul everything, including details about the unauthorized burial at Chancellor Park. But opinionated Phyllis and entitled Nikki said no, no, no. Phyllis even threatened to claim Sharon was mentally disheveled.

Now, with more time to think, Sharon has thrown in with both women who know that their freedom could be taken. But what Case’s character did was a mistake.

Being that this is a soap, seasoned viewers know (not just believe) that all will be revealed, likely during May Sweeps, which is this month. Nick will feel betrayed. His stay at the cottage will be in jeopardy and with that, odds that Shick will realize reunion plans could be dashed.

Oh Sharon, the truth set your mind free within the last year. Why go back to living the pained lifestyle of secrets and lies? It would be easy to say that Nikki and Phyllis influenced you badly. But honest analysis causes heads to shake with a downward stare and lips pursed. You are risking a future with Nick because of what you’ve decided to do, not tell the truth.