BY Heather Hughes on May 4, 2018 | Comments: 3 comments
Related : Soap Opera, Spoiler, Television, The Young and the Restless 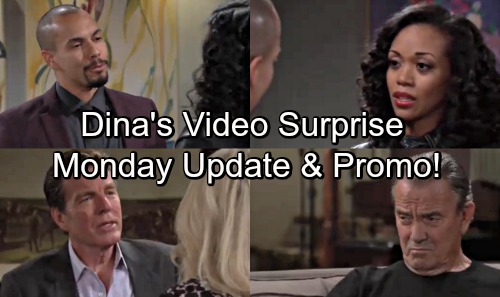 The Young and the Restless (Y&R) spoilers for Monday, May 7, tease that Nick (Joshua Morrow) will push Sharon (Sharon Case) to admit the truth. She’ll insist that J.T. (Thad Luckinbell) wasn’t at the party, but Nick will think he should ask Victoria (Amelia Heinle). When he starts to make the call, Sharon will grab the phone and attempt to shut all this down.

Nick will insist that he’s used to dealing with Sharon’s secrets. He’ll suspect she’s keeping one right now, but Sharon will just lash out him. They’ll rehash plenty of past drama before taking a break from the conflict. However, Nick will continue to pressure Sharon when they meet back up.

Sharon will finally admit that she’s hiding something. She’ll talk about how much she wants Nick, so they’ll move in close for passionate kisses. It won’t be long until these two move things to the bedroom. Meanwhile, Victor (Eric Braeden) will have concerns about Kyle’s (Michael Mealor) evidence. After watching the video, Victor won’t be sure he should buy Dina’s (Marla Adams) version of events.

Kyle will insist that Jack may not be John’s (Jerry Douglas) son. He’ll explain the blood-Abbott clause, but Victor just won’t think the video’s proof of anything. Nevertheless, Kyle will urge Victor to accept his gesture of loyalty. Victor will keep the video and take some time to mull this over.

Jack will agree that there’s potential for Kyle to settle down and be a real Abbott again. Later, Charlie (Noah Alexander Gerry) will provide the edited interview. He’ll reveal that he turned the clips into an actual film. After the Abbotts preview it, they’ll all be thrilled. Jack will eventually pull Kyle aside to praise him for supporting Dina. He’ll seem touched by his son’s interest in her.

At the hospital, Hilary (Mishael Morgan) will come clean to Devon (Bryton James). She’ll admit that her pregnancy was a false alarm. Y&R spoilers say Devon won’t be pleased that Hilary lied. He also won’t like that she planned an insemination without his knowledge.

Despite their issues, Devon will still want to have a baby with Hilary. He’ll think they should move forward the insemination and that’s exactly what they’ll do. Once it’s over, they’ll just have to wait and see what happens. The Young and the Restless spoilers say Devon will show his support and promise that they’re a team.